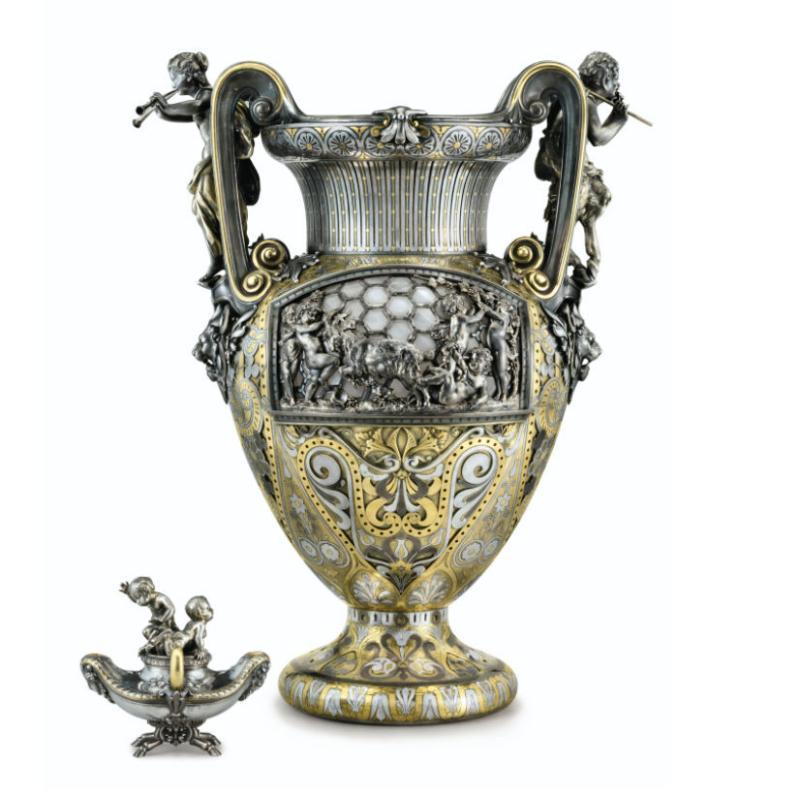 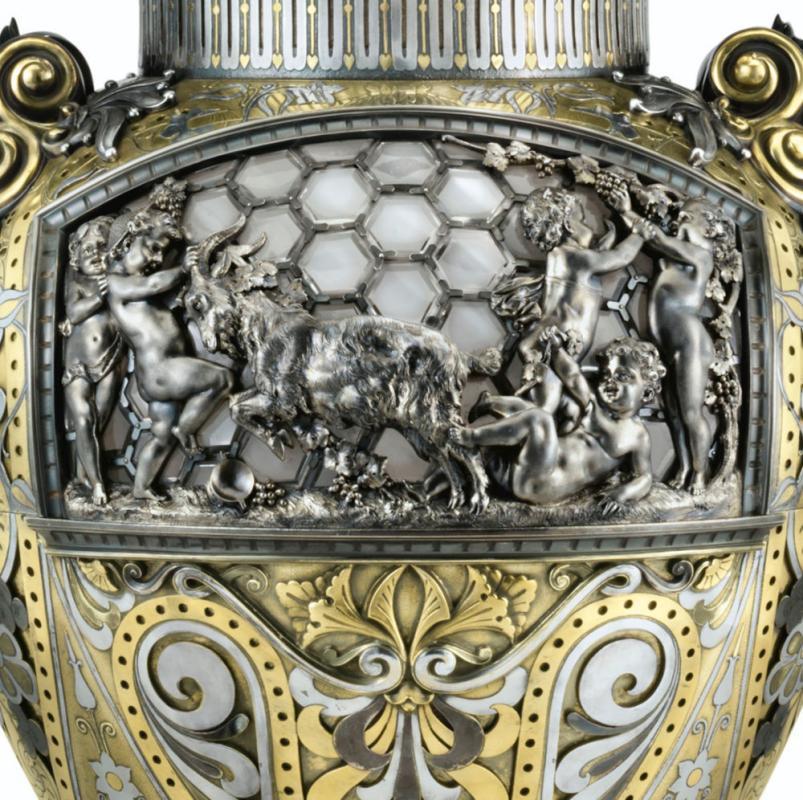 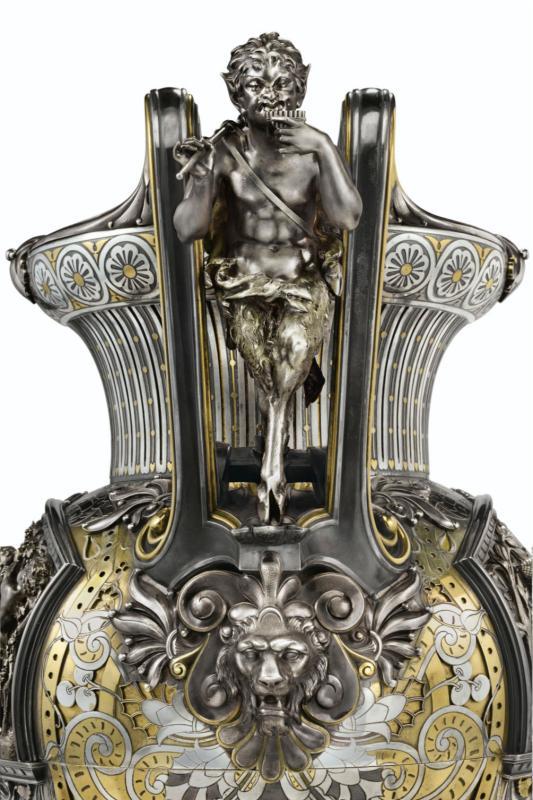 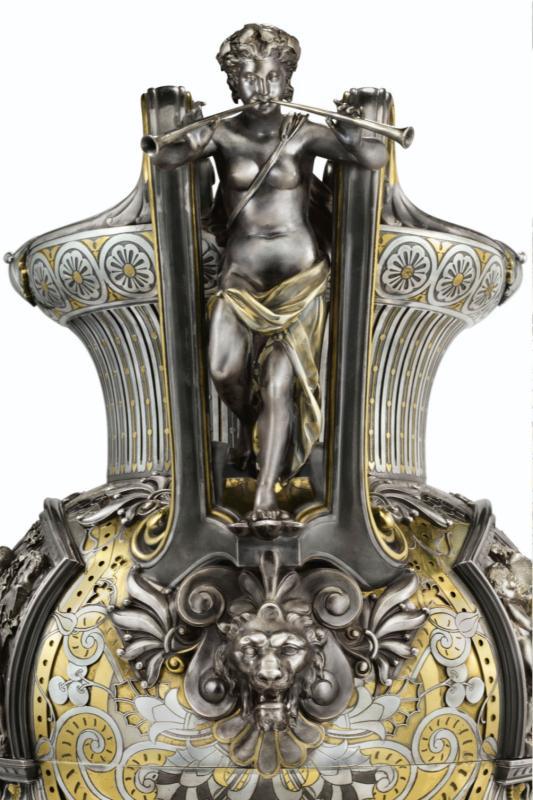 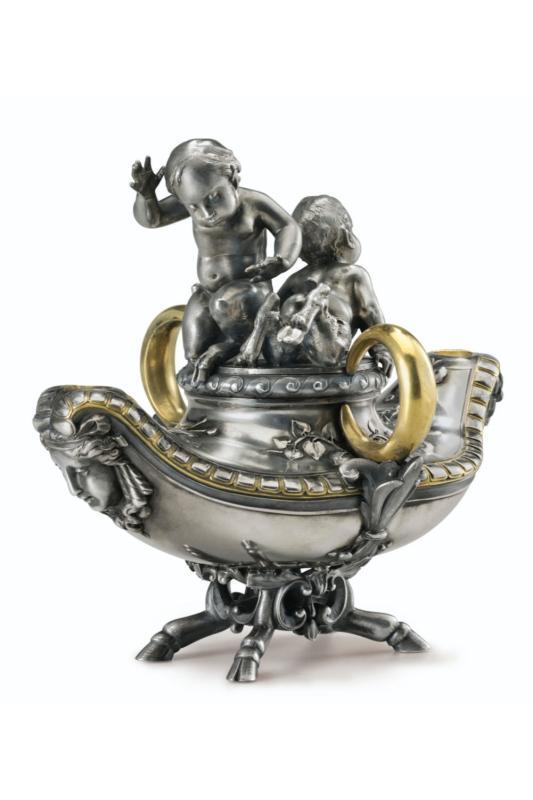 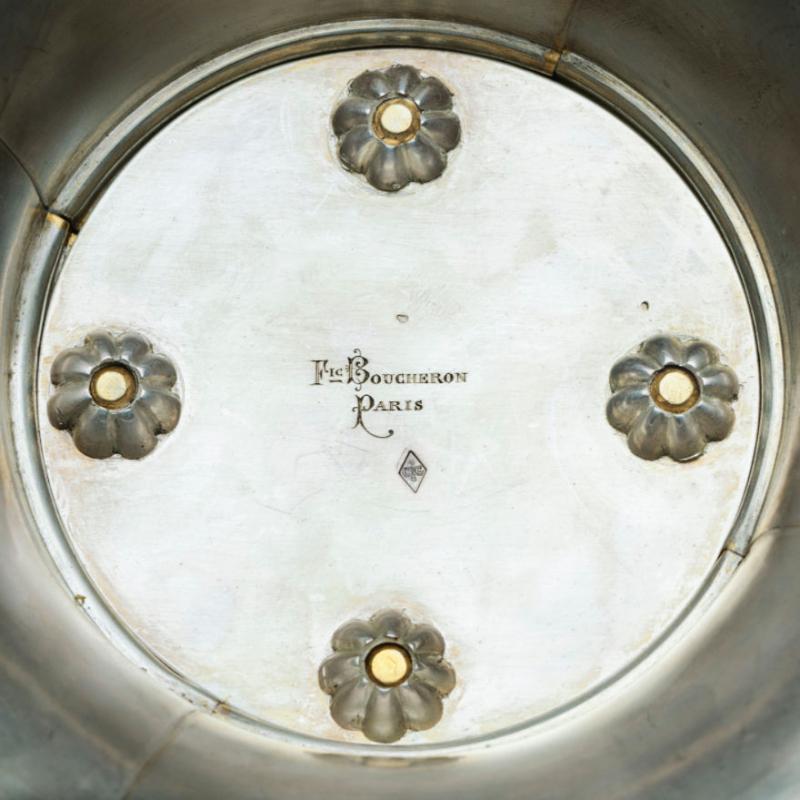 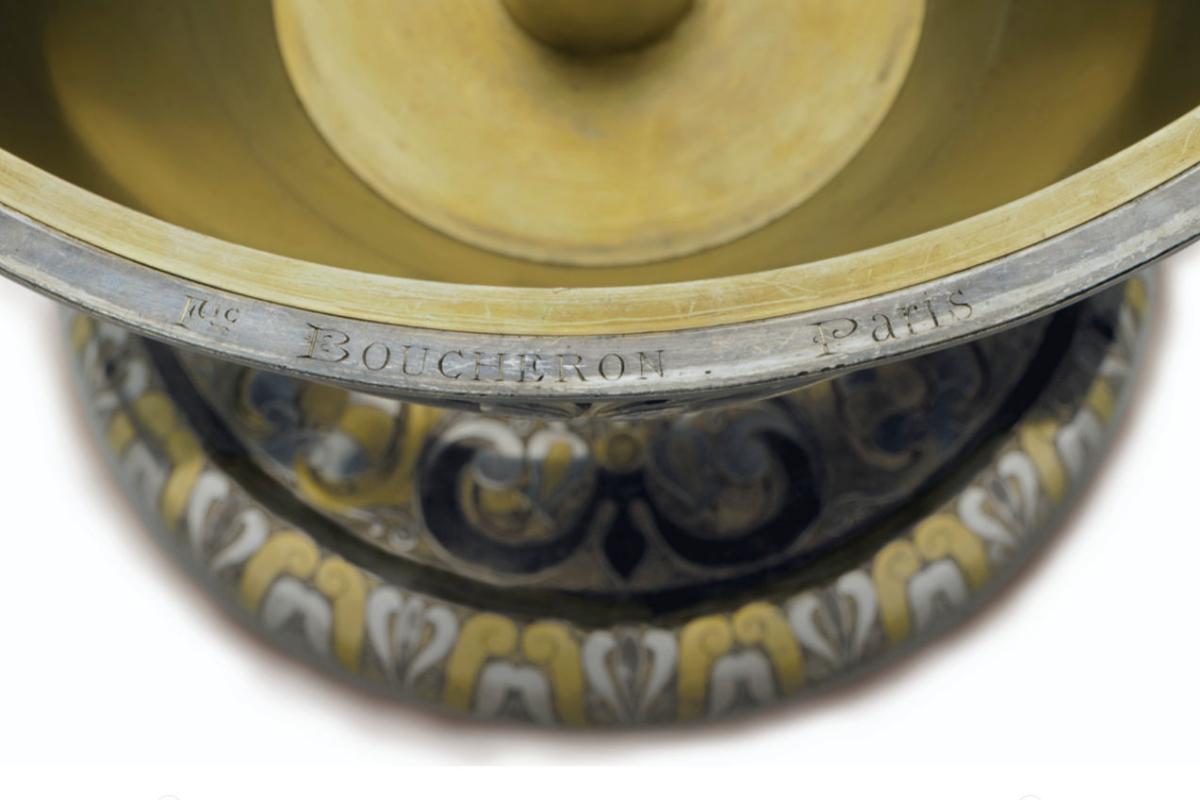 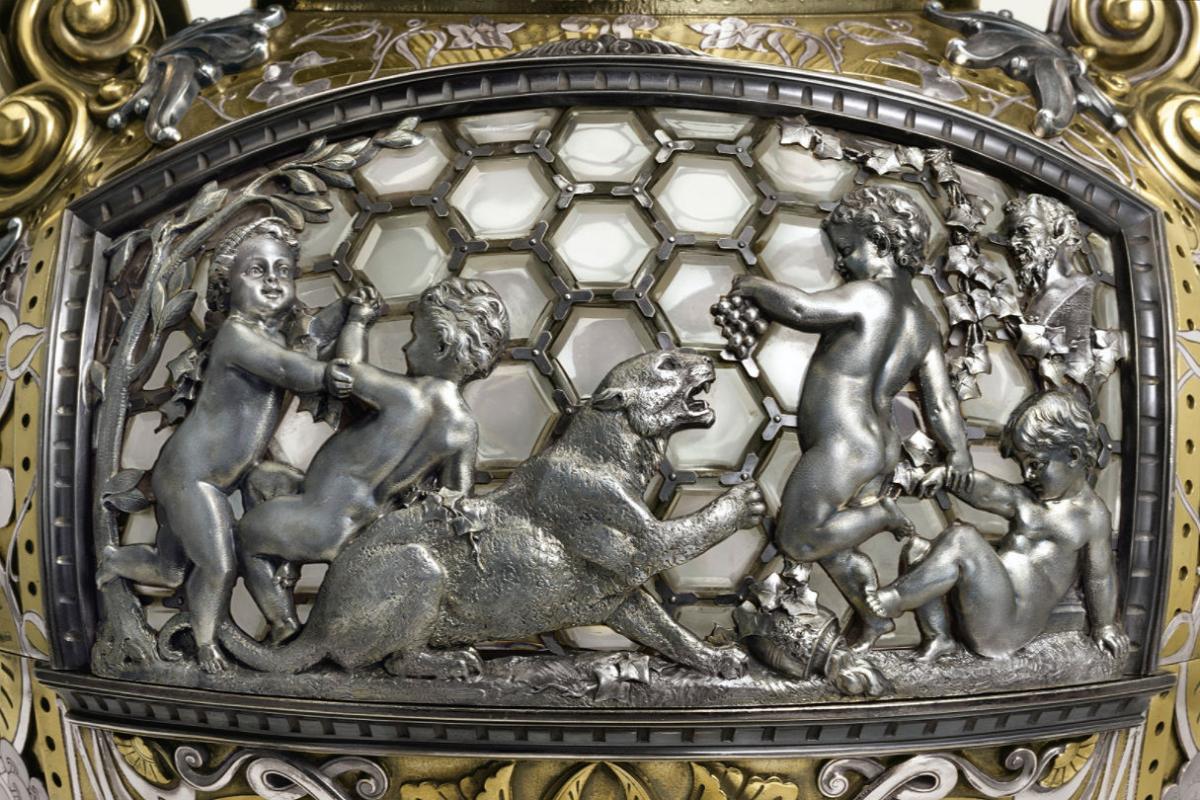 Our important French parcel-gilt and patinated silver and glass-mounted vase and matching oil lamp were produced by Boucheron of Paris, circa 1878-1880, with the design attributed to Paul Legrand (1840-1910).

Provenance:  By tradition, presented to or purchased by Jean-Baptiste Pezon (1827-1897).  Acquired by a European private collector, perhaps on the death of Jean-Baptiste Pezon in 1897, by descent, and acquired by our client at Christie's in New York in their Exceptional Sale on April 27, 2017.  The accompanying lot essay forwarded upon request.

This double walled vase has an amphora form, with body and foot with silver, gilt and patinated and stylized flowers, athemions and sprays of cherries against an etched and matted ground pierced to reveal a gilt inner wall.  The upper body is detachable via a slip-lock, and mounted on both sides with arched panels formed of hexagonal beveled glass tiles.  One glass panel applied with bacchic infants taunting a rearing goat and the other side with infants feeding grapes to a lioness under a looming bust of a satyr.  The patinated and gilt upswung loop bifurcated handles are mounted with fully modeled figures of Pan bearing a syrinx and thyrsus and a draped maenad playing two flutes, both above roaring lion heads, the rim inset with a slip-lock detachable gilt bowl etched with masks of various representations of Bacchus spaced by ribbons and trophies and with scrolling fruiting vines.  The base of interior with detachable base metal drip pan to accommodate the removable oil lamp designed to illuminate the glass tiles from within.  The lamp is raised on four hoof feet, the upturned ends cast underneath with masks and with detachable cover mounted with two infant satyrs and flanked by gilt loop handles.

The vase and detachable bowl are marked on the underside with the maker's mark of Charles Glachant.  The underside and upper rim of the lower body is engraved "Fic Boucheron Paris".  The lamp is marked on underside and flange of cover for Glchant.

Boucheron archives indicate the vase was inspired by the amphora vases created by the Greek potter, Nikosthenes, 550-510 BC. The Nikosthenic amphora vases are a form of Attic vase recognized for their angular amphora form with broad flat handles. Potted of bright orange-red clay, they were decorated with plant and animal motifs within distinct friezes, with the most significant defining feature being the black figure painting, often highlighted with white accents. In this vase Legrand re-imagines the striking contrast of the black figures against a warm ground through the use of patina and gilding. His inventive use of piercing and double-wall construction create additional levels of texture and depth throughout the body.  The same combination of ornamentation was employed in a ewer designed by Legrand in 1880 in the Islamic taste (See lot 77 of Christie's sale in New York on October 22, 2009.)

Edmé Bouchardon (1698-1762), royal sculptor to Louis XV, may have provided Legrand with inspiration for the vase's iconography. The panel featuring bacchic infants taunting a rearing goat is very similar to a bas relief representation of Winter designed by Bouchardon for the Fontaine des Quarte-Saisons on rue de Grenelle, Paris.  Bouchardon debuted his plaster model for the bas relief in 1741, and the fountain was completed in 1745.

According to Christie's, the Boucheron firm, founded by the celebrated jeweler, Frédéric Boucheron in 1858, was known not only for jewelry of exceptional quality and rarity, but also for extraordinary objets-de-fantasie designed in a myriad of styles. The avant-garde artist Paul Legrand (1840-1910) joined the young firm in 1867 and is widely regarded as the creator of some of their most inventive pieces. He was acknowledged by Boucheron to be the designer of the Japanese-inspired pieces made by the firm in the late 1870s, as noted in a report made to the jury of the Exposition Universelle in 1878, for which Boucheron won a grande medaille for joaillerie-bijouterie.