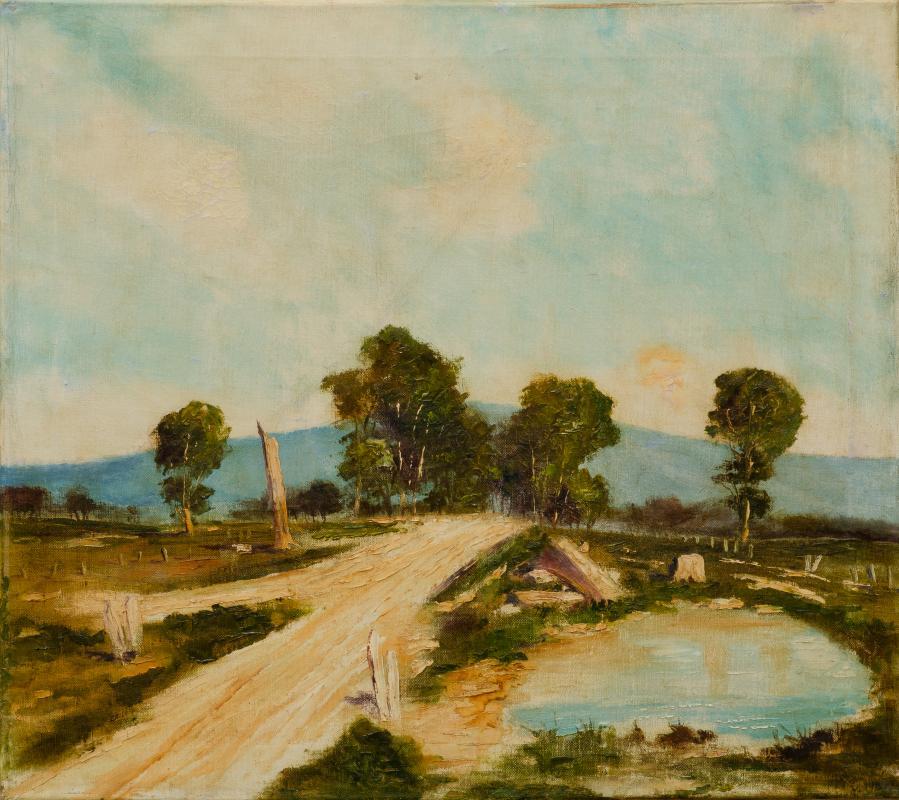 Arthur Streeton is one of Australia’s best known and most influential landscape artists, who along with a small group of contemporaries brought the practice and influence of the French Impressionists to his homeland. Streeton, largely self-taught, also received formal training at the National Gallery of Victoria school in Melbourne from 1882 to 1887 and is known as one of the elite group of painters that include, Tom Roberts, Frederick McCubbin, and later Charles Conder. Streeton is easily one of the most accomplished, influential, and best loved Australian artists of his time and regarded as responsible for many of the great masterpieces of Australian painting, each beautiful and effortlessly created. As a result, his paintings are extensively sought after by both private collectors and art galleries throughout Australia and the world.

Arthur Streeton brought something fresh and different to the Australian art scene, with the Australian landscape featuring strongly in the artists oeuvre. Streeton transformed landscape painting in the 1880’s, and from 1890 amidst a potent mix of new influences and styles, the artist’s work became more powerful, darker in tone and heavier in paint surface. Becoming one of the country’s most notable painters, Arthur Streeton was identified with the general idea of what the true elements were in the portrayal of Australian landscape and was credited with their discovery. Streeton’s Clay-Loam Road, (believed to be painted around or before 1900), is a substantial advance upon the over- embellished landscapes that the artists of an earlier colonial generation produced.

The wide vista and openness of the outback panorama is typical of the skill and painterly qualities that Streeton brought to Clay-Loam Road. The artist’s brilliant ability to inject light and space into his work is clear in this glowing canvas, where Streeton’s refined bravura and confident paint handling caught the opalescent shifts of colour: including, mauves, pinks, yellows, and bronze-greens. Rapid modulations of colour, between lime-greens, pinks, yellows, light blues, and browns, occur within a few square inches and are applied with an agile brush. The eye is led over these complex areas of the Landscape against an expanse of clay, grass, and scrub, as the artist captures the fleeting effects of light by working en plein air. Formulating a more high-keyed palette of light blues and golds in Clay-Loam Road, to suit his passion for light, Streeton deemed this combination the basic colour scheme for painting Australia’s landscapes.

The Clay-Loam Road has neither the majestic stance, nor the proud nationalism of the artist’s large rural themes. Streeton’s poetically attuned vision is what charges the work with a charming local accent and visual quality, as one’s eye sweeps across the plain of the Landscape. The artist's skill in rendering distance and atmosphere in the work, gives emphasis to the unique indigenous beauty of the Australian landscape. Streeton was obsessed by the stillness and remoteness of the Australian landscape and its blinding light. Working under the full glare of the sun at noon, whose light isolated forms with clarity, and threw subtle transparent shadows: perfectly capturing the light and colour and defining a unique Australian image, in Clay-Loam Road. Streeton was influenced by French Impressionism, but also deeply inspired by the painters he befriended throughout his life – Tom Roberts, Frederick McCubbin, Constable and Turner. Hardly a blue shadow is to be found in the Heidelberg school until the artist painted Fires On, 1891. Streeton’s only real point of contact with true impressionism was painting in the open air, straight from the motif. In some ways this present Landscape lay closer to French Impressionism, with its spontaneity, freshness, and bright blue shadows.

The tone of Clay-Loam Road is a rural scene removed from picturesque or pristine views: instead, the artist conveys a clear-eyed view of human activity in the scrub. Streeton, an intensely regional painter, experienced the Australian bush as a romantic, feeling naked before it, echoing his love of the simple life and wish to escape the complexity of the cities. In this Landscape, the earth is laid bare, peeled back by human progress to reveal a muddy, clay loam road, and random scattering of organic debris. The very front of the composition directs the eye towards the earth’s excavation, masterfully anchoring both the picture’s perspective and its narrative – the symbol of human presence in the Australian Landscape. Clay-Loam Road is sullied by man-made intrusions upon the beauty of its expanse: an aesthetic and pictorial metaphor of environmental change, and something that may be seen in many of his finest paintings. Streeton’s love of the local environment and life-long environmentalist concerns placed him at the early forefront of objectors who had serious misgivings about the compromising effects of progress. The Clay-Loam Road Landscape projects subtle artistic contradistinction between natural beauty and deforestation, consistent with Streeton’s environmentally inflected sentiments. Even though the work exists on its own terms and with its own unique grandeur, it is still the promised land, whose receding vista beckons.

Streeton enjoyed working with paint in this robust interpretation of the outback – utilizing the medium’s tactility, variations, oiliness, thickness, and shape under the brush. Streeton's art continued to develop and after 1899 he had adapted his technique which brought a thicker and looser brush stroke. The areas that are in shadow is where the artist mixed and diluted the paint on the palette, then applied to the canvas. Streeton also used crisp brushwork, cutting the fine line of tree trunks and debris, with the edge of the brush. In contrast to the verdant colours are the light clay areas of the Landscape, where the artist wanted to get a sense of very intense light hitting the surfaces, by applying a thick pure paint that he’s picked up on the palette and then just laid it down on the canvas. The scrub of the foreground was painted in Streeton’s improvisatory brushwork style: a free, scumbled way and lack of finish, that recalls Streeton’s early use of the technique. The artist contrasted loose and bold strokes,paintingtheforeground with finer detail,addingdepth to the painting, and drawing the viewer into this harmonious blue and gold landscape. Arthur Streeton had the ability to pull-out the form of a canvas by the manipulation of paint: the painting’s background, middle ground and foreground are full of the artists wonderful paint handling skill, and the best of his paintings, like Clay- Loam Road are characterised by this light-handed deftness.

Initially Streeton began painting city life in Sydney (Australia), then moved further afield to paint the Blue Mountains and Hawkesbury River regions. As Founder member of the Heidelberg School and close friend of its leader Tom Roberts (1856 -1931), Streeton painted with the group in its artist camps at Box Hill, Heidelberg, and the Yarra in the Melbourne, Richmond and the Hawkesbury River, Coogee Bay and Little Sirius Cove, outside Sydney. In 1923, Streeton returned from abroad to Victoria where he bought a home at Toorak and built a cottage at Olinda in the Dandenong Ranges. He made painting trips to many Australian sites and in 1928 was awarded the Wynne prize for landscape. Dandenong’s Landscapes are one of the late vistas of the Dandenong ranges which Arthur Streeton painted from on or near his property Longacres. It is uncertain whether the Clay-Loam Road Landscape is possibly a vernacular of distant Mt Macedon, a view taken from Olinda towards Mt Dandenong or perhaps the Gloucester Buckets Region in NSW. Streeton’s paintings of landscapes north of Sydney (the Blue Mountains, Gloucester, and the Hawkesbury region) would become hallmarks of the Australian impressionist style. In 1893 Streeton set off by train to Taree and then on horseback over thirteen days to the small regional town of Gloucester to paint the distinctive mountain range known to settlers as the Buckets. Streeton was so captivated by the Buckets, he immortalised them in two large paintings and at least four smaller works of the Gloucester’s surroundings. An exceptionally fine testimony of the artist’s engagement with the Gloucester landscape is Streeton’s, The Gloucester Buckets (also known as Landscape - the AA Company’s million acres). The painting is an expansive view across golden-brown grassland, dominated by the towering silhouette of the Buckets (Mountains), under a bright blue sky. Clay-Loam Road recall’s the controlled gold, mauve and blue tonalities, bright blue sky and ‘distant range like a huge dragon asleep in pale blue,’ (Streeton 1893). Like the painting Gloucester Buckets, this Landscape has a poetic, nostalgic feel that captured the moment of seeing what is in front of the artist, but almost a moment of loss as well.

Streeton believed that artists should participate in public life and that their opinions mattered. He did not hesitate to express his own ideas on a wide variety of topics and was often published in the major newspapers of the day. The artist used his public platform to campaign on issues he felt were significant and his roles as an artist and cultural commentator lead to a knighthood from King George VI in 1937. Streeton’s life-long love of nature led to his speaking out against the destruction of Australia’s old- growth forests from the mid 1920s. He was equally concerned about urban planning, and in 1925 campaigned to prevent a tramline being built through Melbourne’s Botanic Gardens. He titled a drawing of the gardens Beware of the axe. From the late 1920s Streeton exhibited many paintings which sought to bring attention to the logging of old-growth forests and predicted a desolate future for Australia if deforestation continued. The present work, Clay-Loam Road, may well be intended to convey a similar sentiment. The denuded foreground is dominated by man’s excavation, reflecting Streeton's anxieties regarding the continuing deforestation.

When examining the Clay-Loam Road (Landscape) painting (H56cm X W64cm X D1.5cm), it is evident that the entire canvas is consummate with the age of the era (circa 1884 - 1900). The wooden stretcher frame has oxidised over time, making the patina of the wood darker. The home-made stretcher frame on Clay Loam Road, most probably made by Streeton himself, is consistent with the construction of other stretchers on works by the artist. and The Keys are dry and have darkened, making them early keys. The painting has one old minor repair and the work not been relined or cleaned, and has purposely been left in its original, authentic condition, due to the significance of the piece. On the verso of the painting the canvas has a dark patina, with some stain and obvious natural aging, consistent with what has been observed on other Streeton works during conservation (see images above). The sides of the canvas hold old nails and the wear and tear is obvious to the sides of the canvas. There is some stabilised craquelure, but no areas of loss. It is my opinion that Clay Loam Road is in Overall good condition.