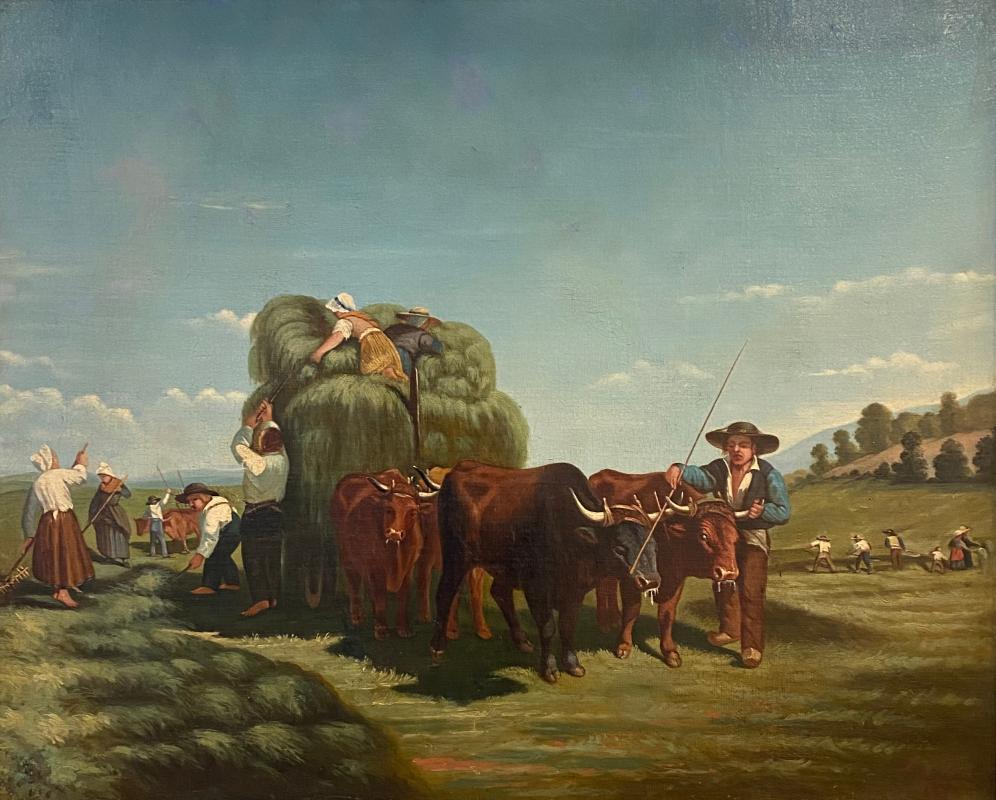 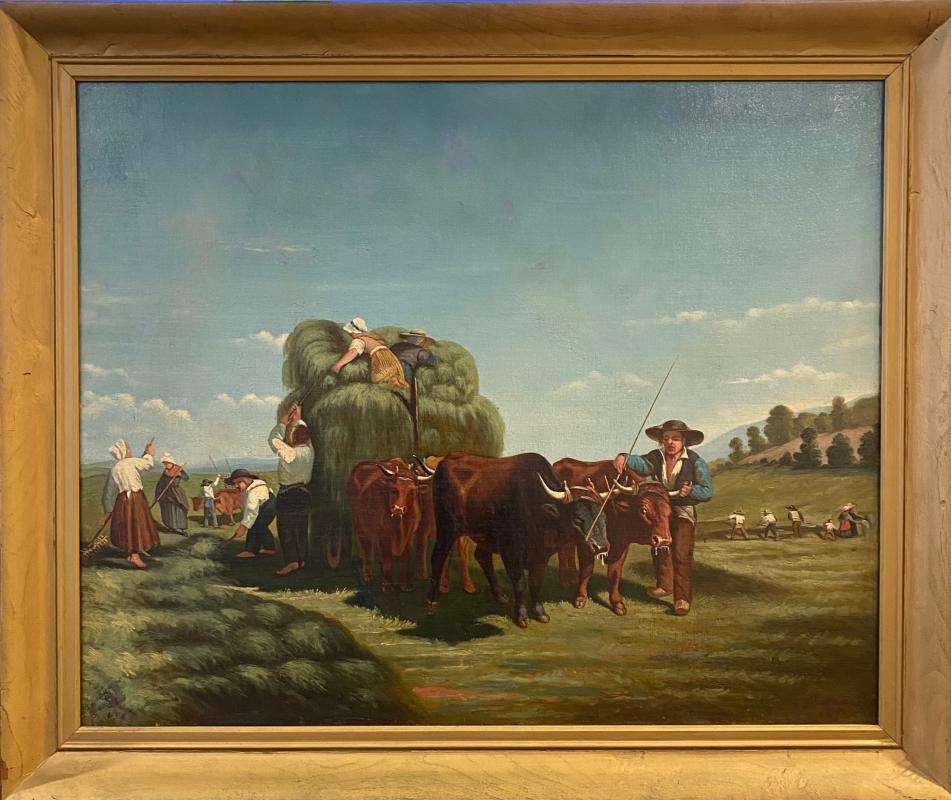 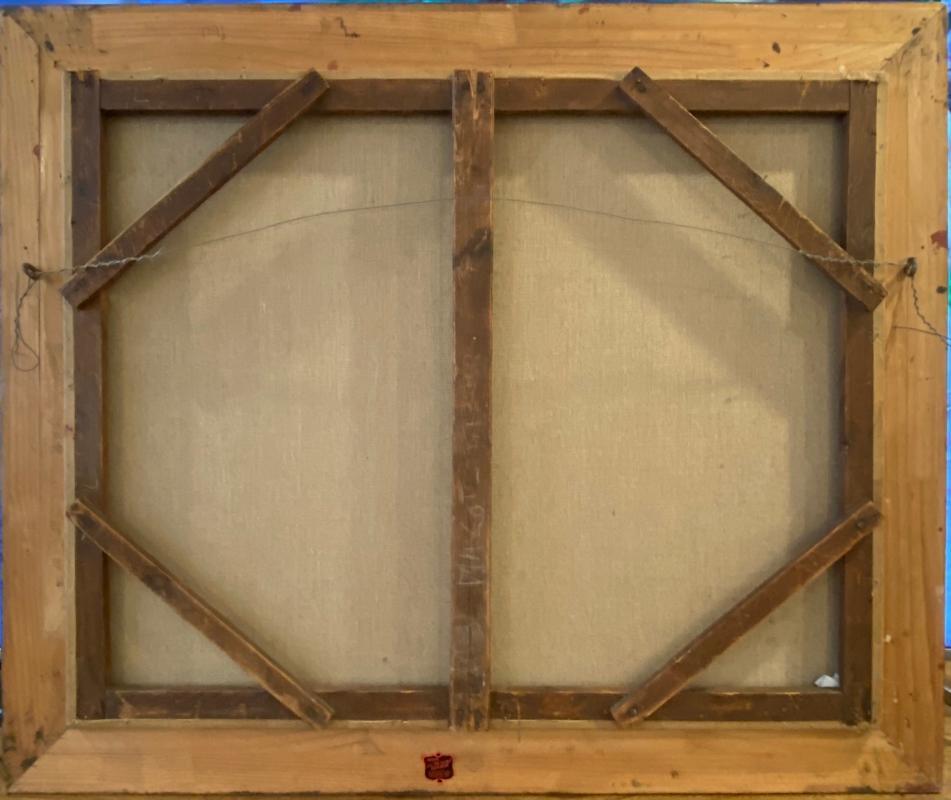 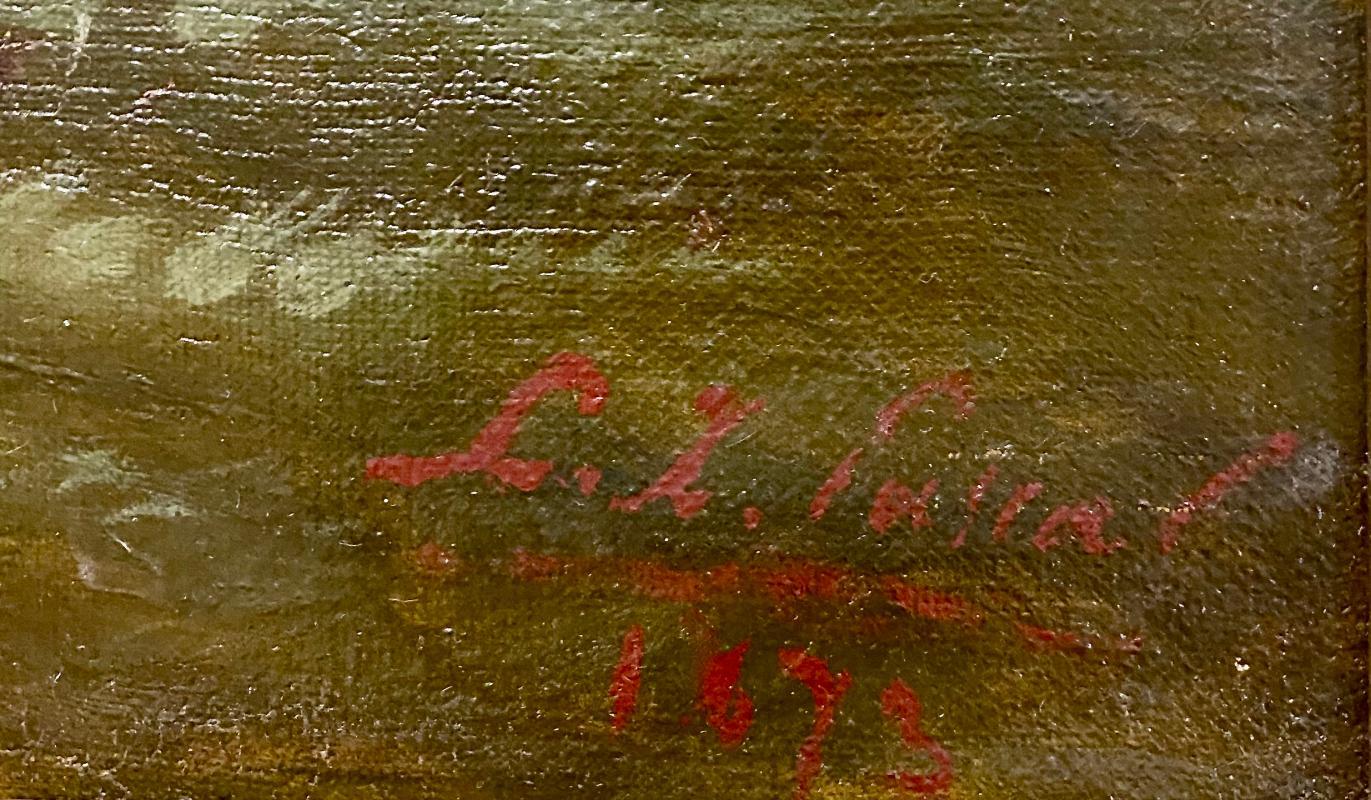 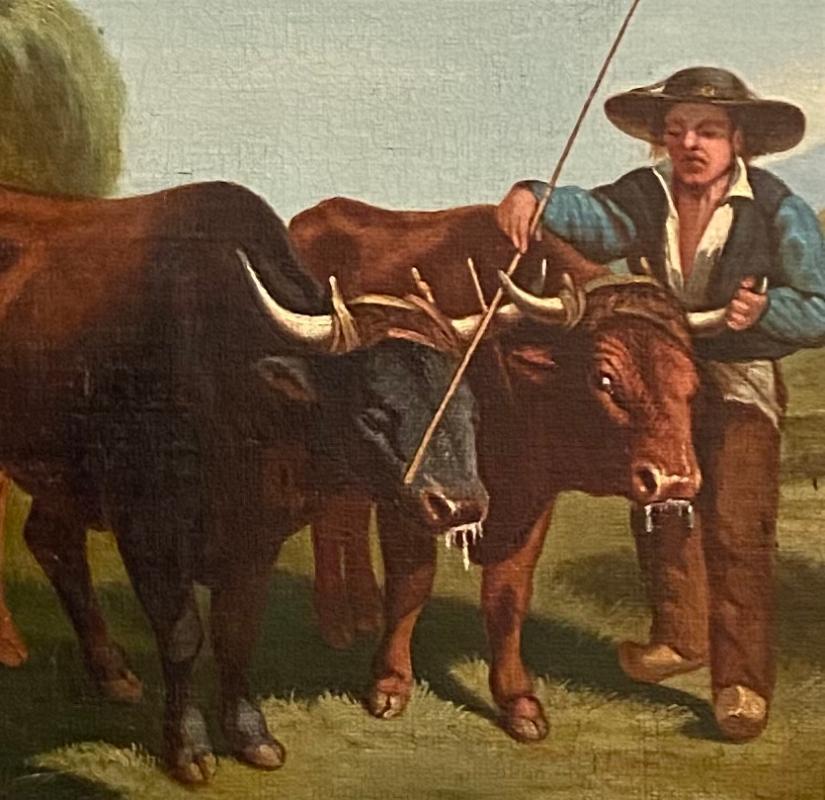 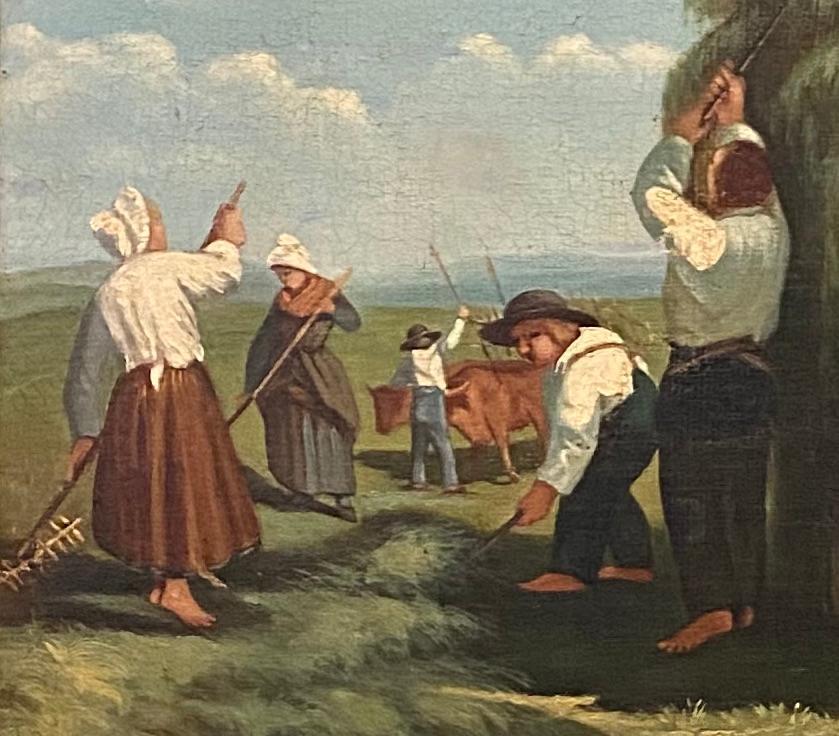 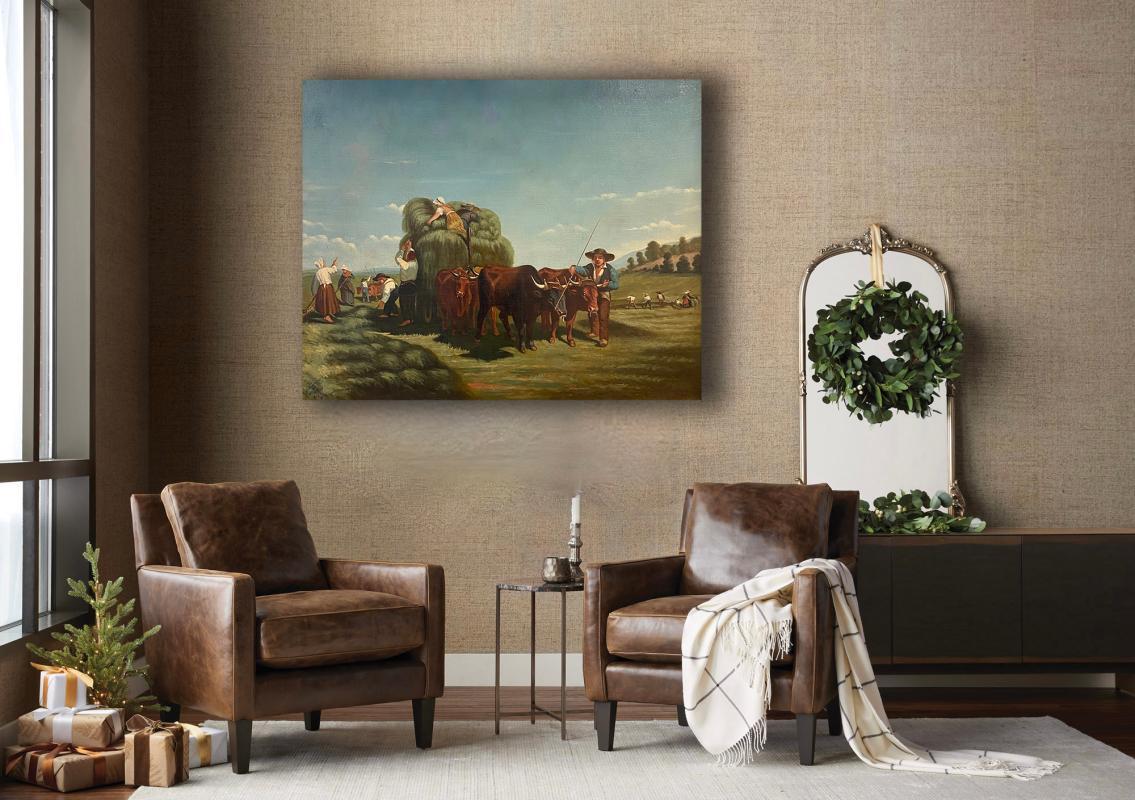 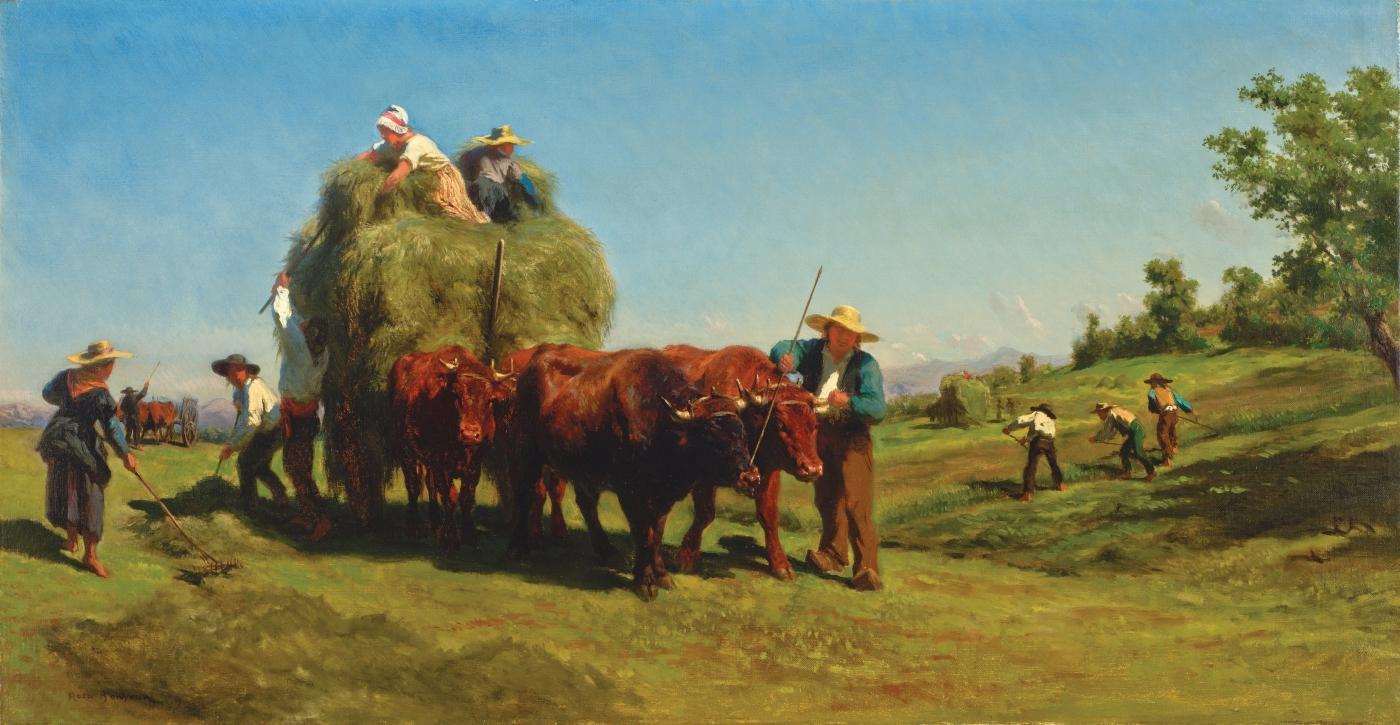 The Dutch Golden Age is a period in Dutch history roughly spanning the 17th century (1568–1648). The Core Period of Golden Age painting was from the late 1620’s until the French invasion of 1672. This original signed and dated painting Harvest Season 1673 is an exemplum of the era and although each individual component of the work is realistically depicted, the overall scene is not necessarily a plausible depiction of a real moment: typical of genre painting, it is a situation that is depicted and satirised. Many paintings which seem to show only everyday scenes are actually illustrated Dutch proverbs or conveyed a moralistic message, the meaning of which are now being deciphered by art historians. Another popular source of meaning are visual puns using Dutch slang, with purely visual symbols such as shoes, sprouts, and jugs etc. The Oxen seen here in Harvest Season are a symbol of prosperity and the overseer wears shoes (Dutch Clogs), projecting the concept of a hierarchy. Working-class men going about their jobs are notably absent from Dutch Golden Age art, with landscapes populated by travellers and idlers but rarely tillers of the soil (as seen here in Harvest Season). Despite the Dutch Republic being the most important nation in international trade in Europe, the abundance of marine paintings, scenes of dock workers and other commercial activities barely exist - making images like Harvest Season, rare indeed! Another factor which makes Golden Age paintings scarce is the fact they were reduced in quantity from being overpainted with new works by artists throughout the 18th and 19th centuries (because this was usually cheaper than a new canvas, stretcher and frame). Over the course of the century, genre paintings tended to reduce in size also. The authentic, museum-quality, Dutch Gold Age painting Harvest Season 1673, is a rare acquisition, commensurate with the age of the period. The work and has been meticulously restored and relined by Jarmon Eastgate Restoration Services.

Rosa Bonheur was widely considered the most famous female painter of the 19th century. After her first great artistic success, Ploughing in the Nivernais 1849, French Minister of Fine Arts Charles de Morny, Duke of Morny commissioned the work Haymaking in the Auvergne. Harvest Season 1673, has been a catalyst for other artists centuries later (in the 18th & 19th centuries), who have celebrated the original work by painting copies and reproductions of the iconic image. Bonheur painted Haymaking in the Auvergne in c1850's, which she copied from the original work, Dutch Golden Age painting, Harvest Season 1673! (compare images of the two works in the thumbnails). From the beginning of her career Rosa Bonheur began copying paintings of old Dutch Masters and works at the Louvre, reinterpreting the works in the style of realism. Among her favourite painters to copy were old Dutch Masters, Nicholas Poussin, Peter Paul Rubens. She also copied paintings of Paulus Potter, Francis Pourbus the Younger, Louis Leopold Robert, Salvatore Rosa, Karel Dujardin and many other artists. Bonheur’s reproduction Haymaking in the Auvergne depicts the loading of hay onto a cart pulled by four oxen. The beasts to the right wait patiently, attended by a man in a wide-brimmed hat. Other men are cutting grass with scythes, while women rake up the hay and others use pitchforks to lift the hay onto a large pile on the cart. Bonheur’s reproduction painting Haymaking in the Auvergne was bought by the French state in 1854 for the princely sum 20,000 francs! It won a gold medal when it was exhibited at the Exposition Universelle in Paris in 1855 as a pendant for Ploughing in the Nivernais. It was also exhibited as part of the retrospective of 18th century art at the 1900 Exposition Universelle. Bonheur’s painting was held at the Musee de Luxemburg from 1874 to 1878, and then moved to the Chateau de Fontainebleau, where it remains. A smaller version, 71.1 by 129 centimetres (28.0 in × 50.8 in) is in a private collection. The print of an engraving by William Turner Davey was published in London in 1878 by Louis Brall & Sons.

Please contact the Seller for a written appraisal by the Professional Services of Joe Castagno, (Researcher, Art Lecturer, Art Appraiser and author of at least a dozen books in his particular field of Art.)  Mr Castagno's expertise is recognized and accepted worldwide.