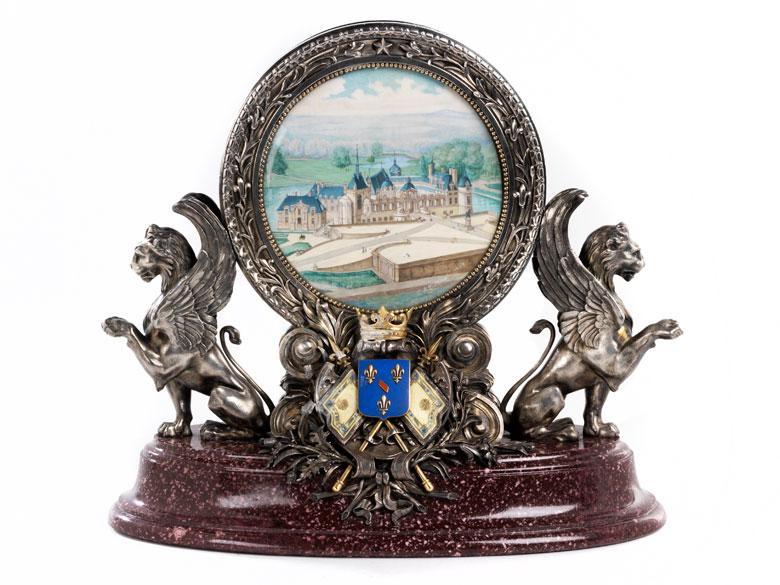 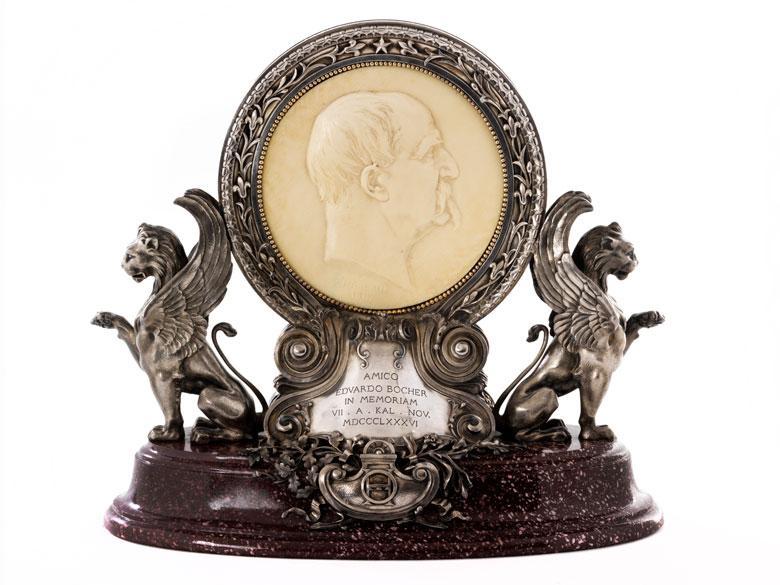 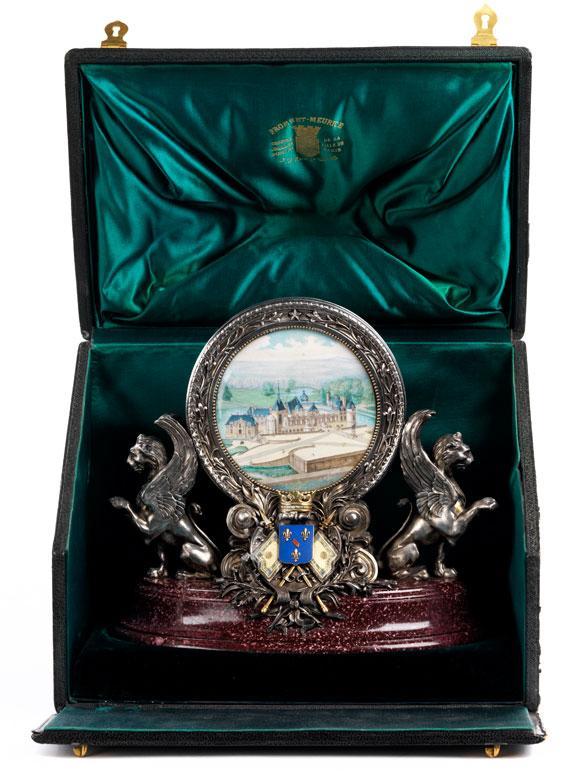 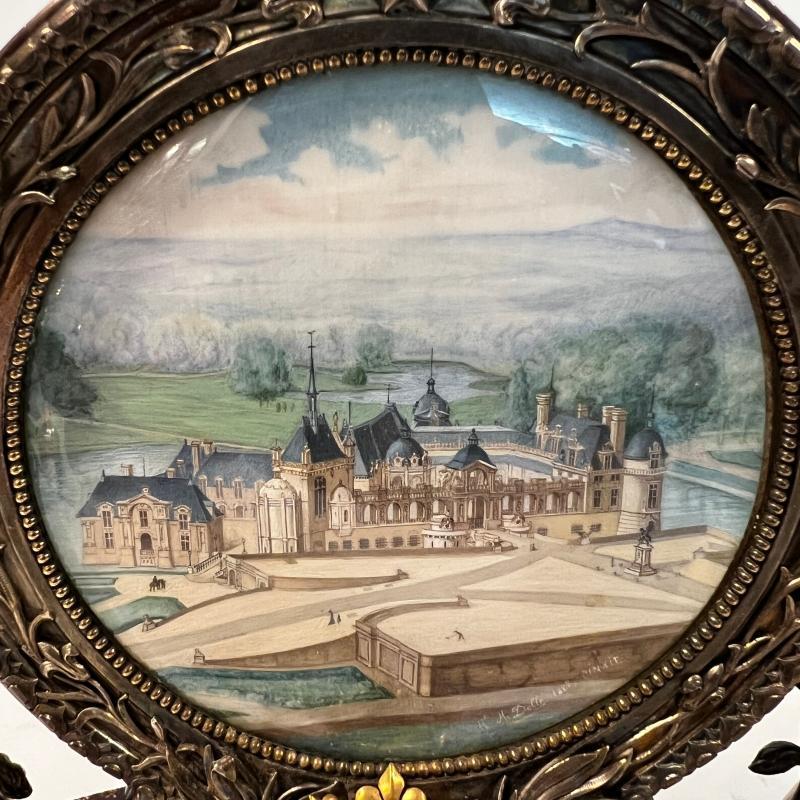 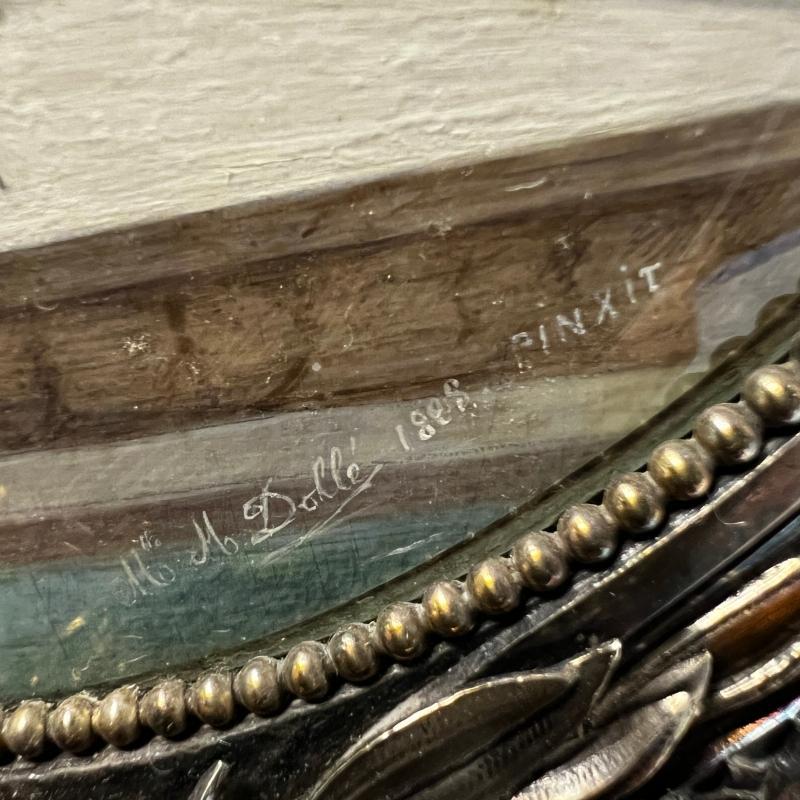 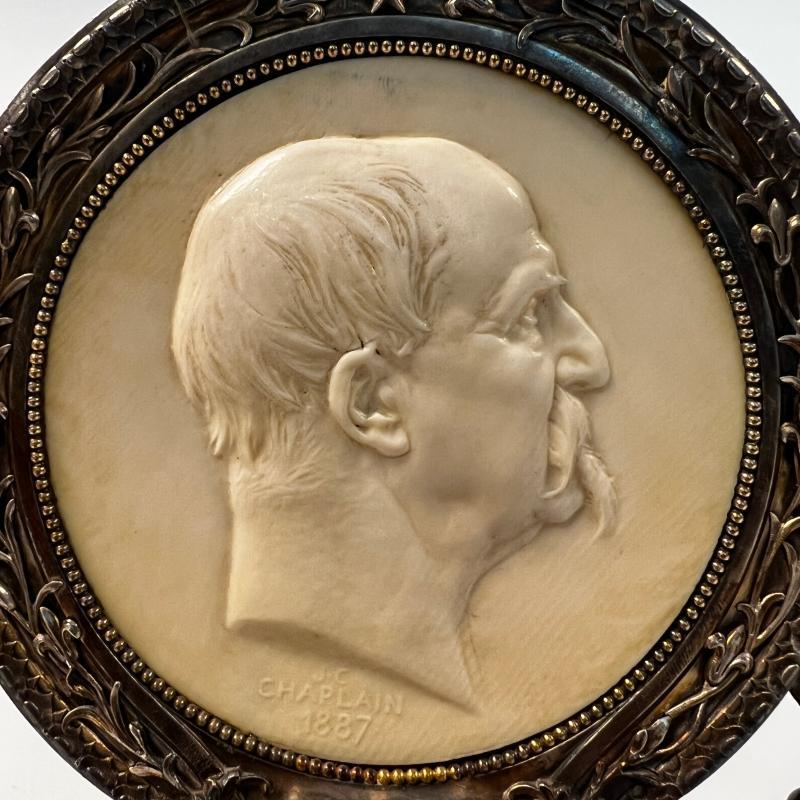 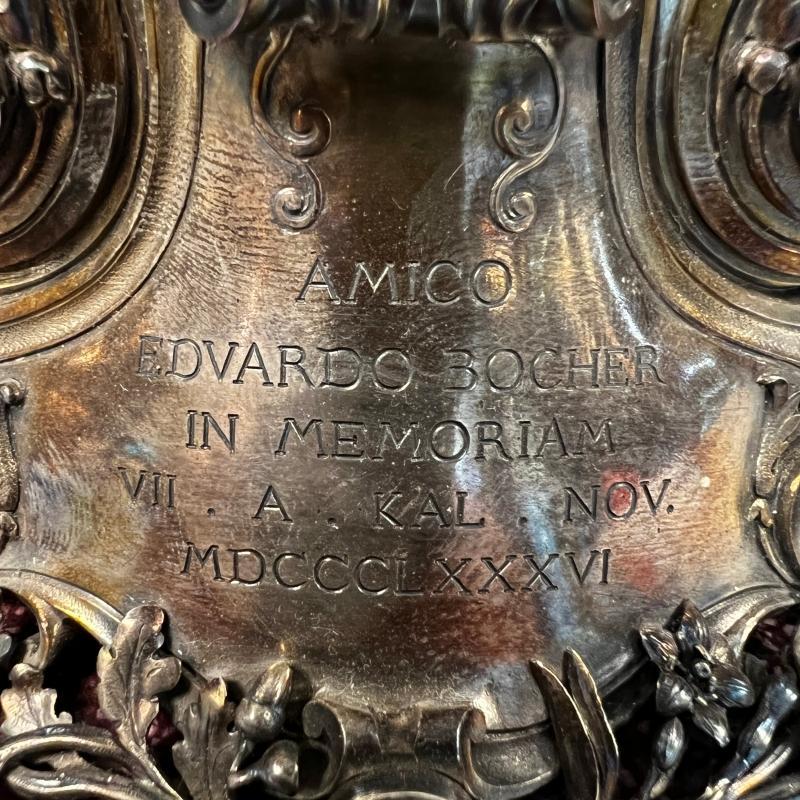 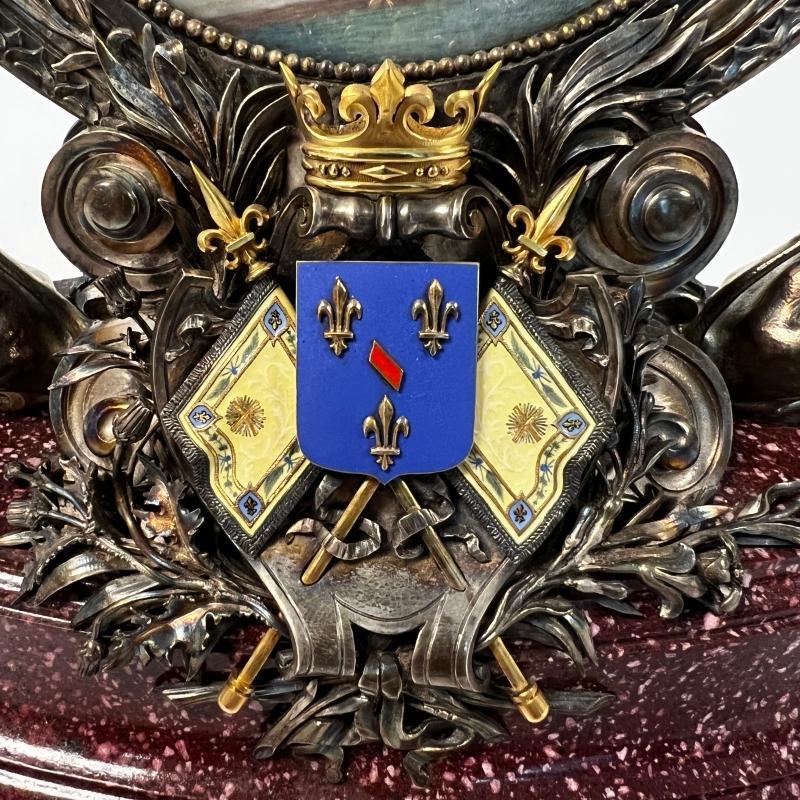 Our French silver and porphyry presse-papier with its original presentation case, is one of just four commissioned by the duc d'Aumale, Henri d'Orleans (1822-1897) to commemorate the rebuilding of the Chateau de Chantilly and its transfer of ownership to l'Institut de France (completed in 1889), the price of his return from political exile.   8 1/8 by 9 by 4 5/8 in, 20.6 by 23 by 11.8 cm.  According to Christie's, one was produced for each of four individuals who were key to the transfer, including Edouard Bocher, Ernest Denormandie, Enrico Limbourg and Edmundo Rousse.  Our paperweight is dedicated to Bocher (1811-1900), manager of the Orleans family estate, and who may have been the closest ally to the Duke.  A fifth paperweight was donated to the collection of the chateau by the Duke himself and still resides in the collection today of Musée Condé at Chateau de Chantilly.

It was designed by Honoré Daumet (1826-1911), the architect who oversaw the restoration of the chateau from 1875 to 1882, and manufactured by P.H. Emile Froment-Meurice (1837-1913).  It features a relief of Henri d'Orleans by Jules-Clément Chaplain (1839-1909) and miniature by M. Dollé, Paris, depicting Château de Chantilly.  With its original silk-lined, gilt-embossed leather-covered presentation case with the logo of Froment-Meurice.

It is centered by a circular double-sided frame with lappeted edge and fleur-de-lys decorated border, enclosing on one side a view of the Château de Chantilly, signed to the lower right Mlle M. Dollé 1888 PINXIT, and inset to the other with a profile portrait medallion of Henri d'Orléans, duc d'Aumale, inscribed J.-C. CHAPLAIN 1887.   It is flanked by a pair of sejant winged lions and supported on a scrolled foot.  One side is applied with a cartouche displaying the Bourbon-Condé coat of arms, and on the other engraved AMICO/EDUARDO BOCHER/IN MEMORIAM/VII. A. KAL. NOV./MDCCCLXXXVI, above a shield with H.O. monogram for Henri d'Orleans.  The edge of a scroll is engraved FROMENT-MEURICE.  Set upon oval shaped porphyry plinth with hallmarks to the tips of the lions' wings.

Henri Eugene Philippe Louis d'Orleans, Duke of Aumale (1822-1897), was a leader of the Orleanists associated with the French monarchy.  He was the fifth son of King Louis-Philippe I (1773-1850) and Maria Amalia of Naples and Sicily.  From 1875 to 1882 he oversaw the rebuilding of the Chateau de Chantilly, nearly destroyed during the Revolution.  Following a distinguished military career, he became Inspector General of the French army in 1879.  He lost this position with the passing of the Act of Exception in 1883 which deprived all family members of those who reigned in France of their military positions.  And in 1886 an additional law expelling from French territory the heads of former reigning families led to the Duke's exile. His transfer of the Chateau de Chantilly, including his extensive art collection, led to his return from exile.

Jules-Clement Chaplain (1839-1909) was a highly admired French sculptor and medallist, known with Louis Oscar Roty (1846–1911) for helping found the Art Nouveau movement.  At the École des Beaux-Arts he studied sculpture under François Jouffroy and medals under Eugène Oudiné.  In 1863 he won the Prix de Rome for medal engraving and worked in Rome thereafter for four years.  He exhibited at the Salon beginning in1863, receiving numerous awards, and in 1869 returned to Paris where he found official success almost immediately.  In 1877 he was named official medallist of the French government, and in 1878 a chevalier of the Légion d'honneur.  In 1881 he was appointed to the Académie des Beaux-Arts and in 1896 he became Art Director of the Manufacture Nationale de Sèvres.  In 1900 he was awarded Commander of the Légion d'honneur.  He created official portraits of every president of the French Republic and received the commission for engraving the gold coinage of France.

We may not ship this item outside the continental United States.