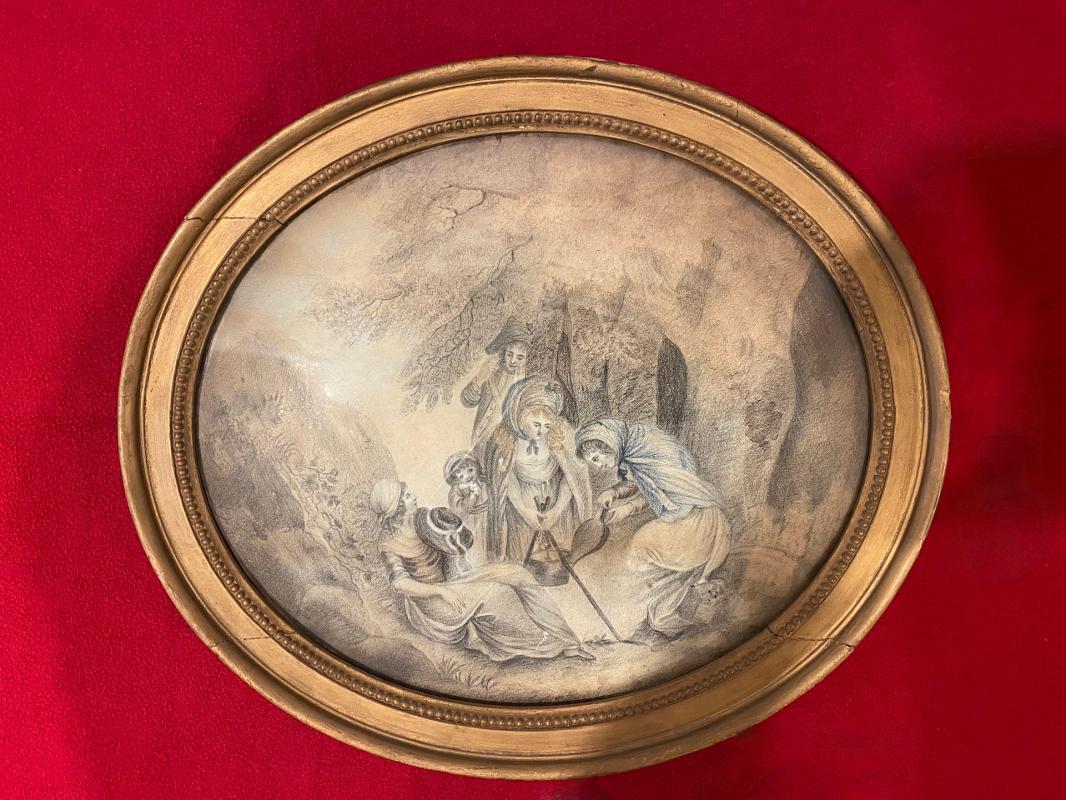 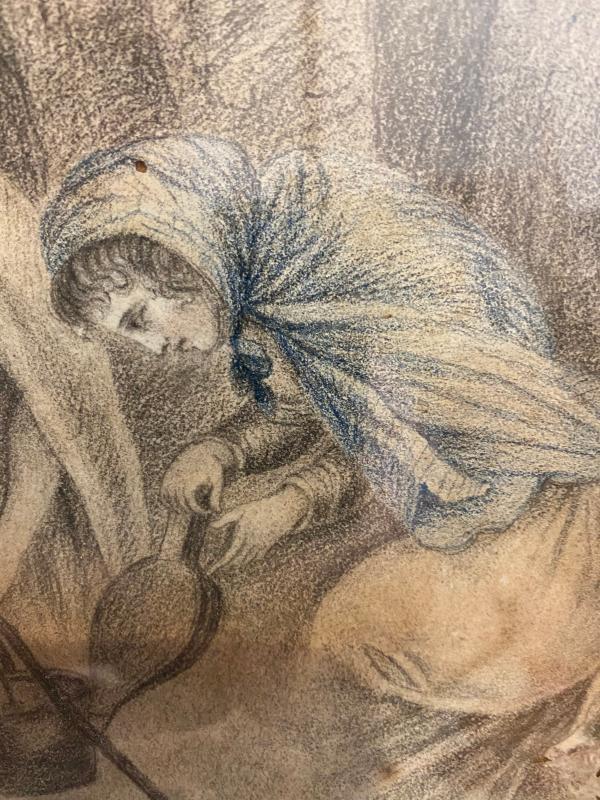 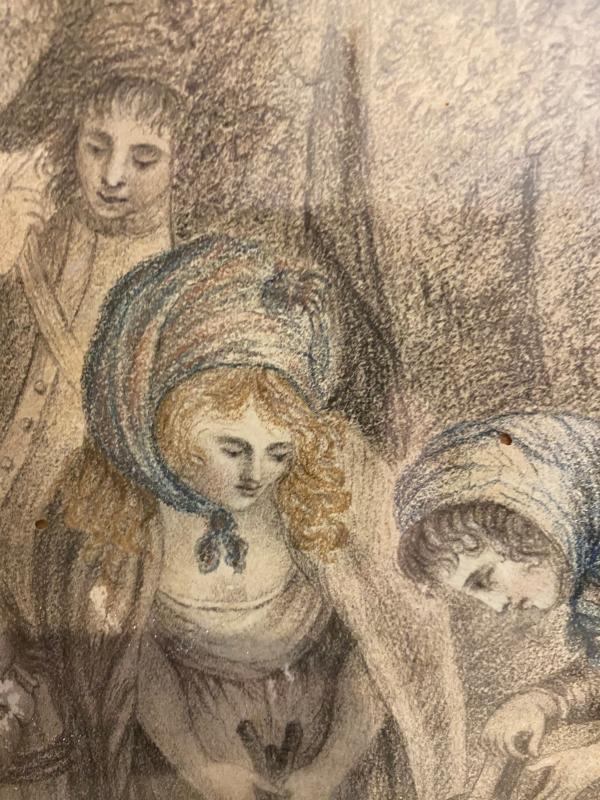 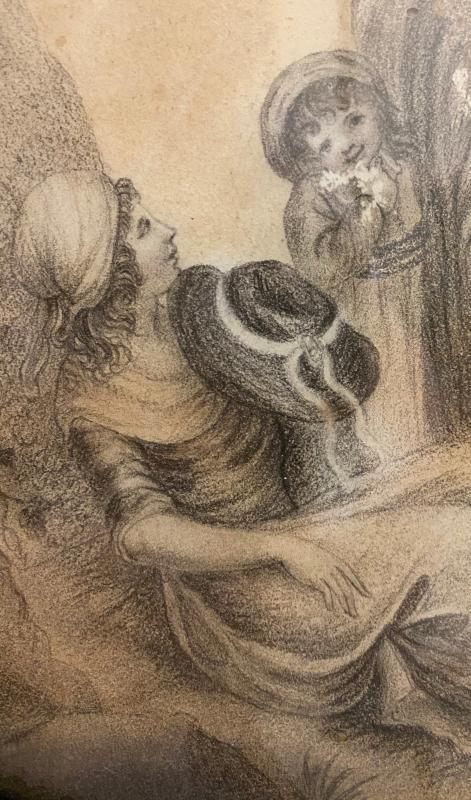 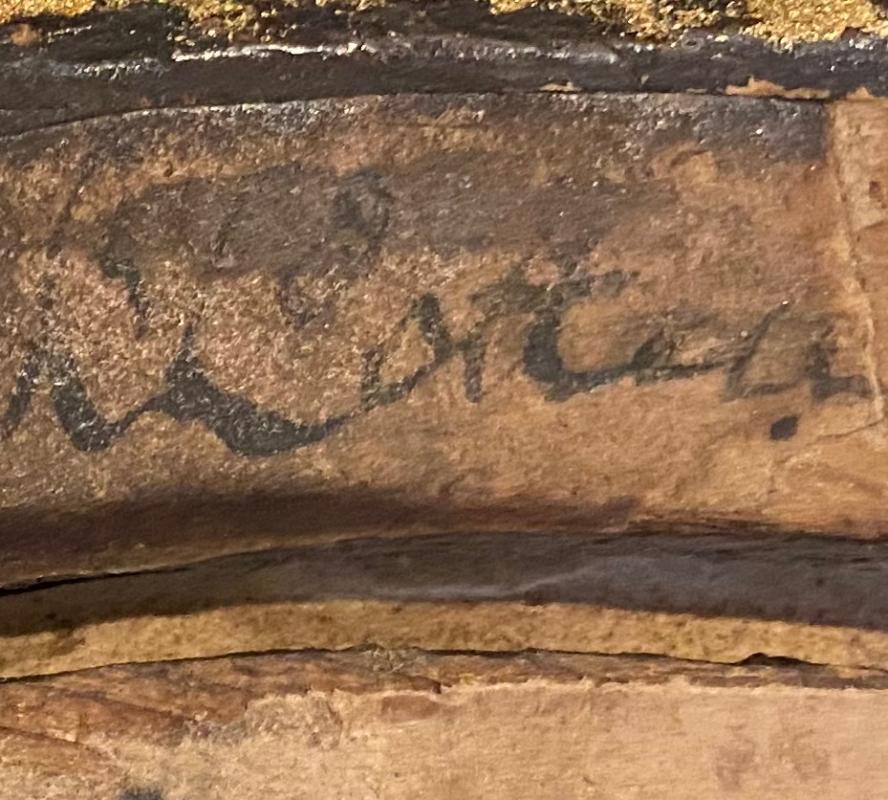 Antoine Watteau (1684 –1721) was a French painter whose brief career spurred the revival of interest in colour and movement, in the tradition of Correggio and Rubens. He revitalized the Baroque style by shifting to the more naturalistic, less formally classical, Rocco. Watteau is credited with inventing the genre of fête galantes (courtship party): scenes of idyllic charm, suffused with a theatrical air. Despite this, his drawings are said to also embody a sense of sober melancholy and ultimate futility in life. The Baroque style began at the start of the 17th century in Rome, then spread rapidly to France and Central Europe until the mid to late 18th century. Watteau went to Paris in 1702, and from 1704 to 1708, worked with Claude Gillot on sets for the theatre. Still poor and unknown, he was taken in by Claude Audran, painter and Curator of the Luxembourg Palace. Gersaint, a friend and biographer, testified that Watteau “was more satisfied with his drawings than with his paintings and found more pleasure in drawing than in painting.”

After the publication of Rosenberg and Prat’s monumental, three-volume catalogue of Antoine Watteau’s drawing in 1996, it seemed as though few new works would ever appear. But with the passage of time, small discoveries here and there have proven that the world of Watteau’s drawings is an expanding universe. Watteau’s Untitled, Country Interlude assures us that not only the number of works  will continue to increase but also that they will enrich our understanding of this great draftsman’s oeuvre. Admiration for the drawings of Watteau has always been equal to that of his paintings. At his death, Watteau bequeathed more than 4000 drawings to four of his friends, less than a fifth of them still exist. Untitled, Country Interlude is a rare compositional drawing by the artist.

Many of Watteau's most important works have stage-like settings with a panoramic scene extending laterally in very shallow space. Such compositional devices can be directly observed here in Untitled, Country Interlude and traced to the artists love of the theatre and ballet. Untitled, Country Interlude is a closed circle observed from within, beautifully laid out on the page, almost like cinema – with different viewpoint’s, angles and moments in time. This ephemeral work feels alive and quick with Watteau's mark! The scene is set in the artist's characteristic oval format, with the four major figures appearing in roughly the same location as those in other works - compare examples: The Country Dance 1706-1710 and The Lesson of Love 1716. The form of the figures is possibly derived from studies in the artist's collection and a rhythm of curved lines runs through the group, giving the composition a certain distinctive flow, often seen in Watteau’s works.

Watteau’s type of painting usually depicts figures in fancy dress making romantic overtures to one another, a type of  dream-world concerned with themes of love, secrecy and playfulness. Idealised and wholly romantic, Watteau's allegories of courtly love in Untitled, Country Interlude are nevertheless free from the sentimentality and prettiness generally associated with the Rococo. The artist also knew the world of the streets, Savoyards, Fairs, and the hand-to-mouth existence that during his earliest youth he shared with other struggling artists. Watteau’s figures in Untitled, Country Interlude hold natural, unpretentious, everyday poses and their facial features are schematic and almost mask-like with subtle expressions that hint at elegant sadness. The artist concentrated on defining contour lines and drapery folds with neatly rendered soft shading to build rounded, earth-bound forms. The distinctive Watteau style continues with the pronounced tapering of fingers and typical facial expressions. The sense of mystery and reticence in Untitled, Country Interlude derives partly from the naturalism of the figures and their landscaped idylls.

Untitled, Country Interlude embodies Watteau's amazing ability to capture time in passing, as it were, the liveliness of individuals moving about. Both the arrangement on the page, as they turn their heads and the freshness of execution gives an illusion of spontaneity. Watteau achieved “freedom of execution,” “delicacy of contour,” “lightness of touch,” and “grace of expression,” in Untitled Country Interlude.  Although the poses seem casual and natural, the degree of calculation in the drawing is high as he neatly arranges his subjects in two rows. They constantly turn their heads, (pairs of heads) and by their contrapposto, also balance one another across the page - while a continuous rhythm moves from one head to another head. Each figure is true and natural, with the scene capturing the viewer’s attention.

Watteau’s studies provided him with a stable of figures that he would later arrange on the canvas. As a consequence, figures previously isolated in his sketchbook were brought together and juxtaposed in new social relationships. The artist’s working method generated unusual effects, resulting in connections between individuals that are not entirely resolved. Because the figures were not originally drawn or conceived as engaging with each other, their gazes do not quite meet. What appears on first inspection to be a scene of conviviality gives way to a series of failed connections, a vision of uneasy and troubled social commerce. Various individuals populate Untitled, Country Interlude, rounding out a scene brimming with apparent companionship and community. Yet a closer look shows that this scene is a more troubled social landscape than it first appears. the figures, seem lost in their own world; even when one figure looks toward another, it is not clear that the gaze is returned or that a real connection has been made.

Compare Watteau’s painting The Scale of Love (1715 – 1718) with the artist’s romantic allegory here in Untitled, Country interlude (1701), where the young soldier dressed in military uniform peers from behind a tree in the setting of a wooded glade. The young woman holding her hat sits on the ground at the base of him, leaning against a rock. She twists her body and her head upwards, strongly towards him, and appears to have eyes only for the soldier. They appear engaged in a silent dialogue as his downcast eyes appear focused on something not visible. The couple's poses, and the way he respectively raises his hand in a ‘come hither’ fashion, creates a strong central diagonal that both unites them as the main subject and separates them by a sense of physical tension. Moreover, though they are oblivious to anyone else, the couple are not alone. The other two young women are engaged - one with tending to the brew, the other stoking the fire with the bellows. The one woman has her back facing the soldier, the other is crouching over in profile position. There is a little girl sweetly smiling, looking directly at the viewer, cleverly placed between the two romantic subjects. These figures draw the eye to secondary figures in the middle ground and background, all of whom are engaged in their own pursuits and paying no attention to the main couple. At first glance picturesque, Untitled, Country Interlude can be seen as making a larger point about the way in which people relate to each other, about the connections that hold society together.

Few artists would seem further removed from the misery of war. And yet, early in his short career, Watteau created a number of military scenes. For the most part, they were executed during the War of the Spanish Succession (1701– 14). However, neither the turmoil of battle nor the suffering that ensued seems to have held much interest for the artist. Instead, he focused on the prosaic aspects of military life where soldiers could rest and daydream. Watteau’s drawings and paintings are set apart by their focus on the common soldier. More than his predecessors, Watteau offers an intimate vision of war, one in which the human element comes to the fore. His soldiers are endowed with an inner life, and subjectivity. Rather than expressing heroic action or demonstrating drills, the soldier in Untitled,Country Interlude communicates a sense of withdrawal and is absorbed in a world of private experience. The figure seems not only unaware of the artist’s presence, but actively evading it, as though deflect his probing gaze.

Among numerous other French painters, Antoine Watteau drew studies of figures and drapery aux trois crayons. The technique was, most notably, pioneered and popularised by the Flemish master Rubens. Trois crayons (French - English: "three chalks") is a drawing technique using three colours of chalk red (sanguine), black, and white. Usually in his drawings Watteau favoured black chalk with only touches of red. More interesting still is his use of graphite with the material appearing in French drawings by 1714, but its origins are obscure and do not indicate a date per se, as Watteau didn’t sign and dated his drawings. The graphite and black chalk deepened shadows and added colour to the hair and clothes. The artist secured contours in the initial stages of the drawing, the black accents and shading, stumped in places, replicate textures and built a more solid scene. Watteau’s Untitled, Country Interlude is more highly finished than some his previous sketches. The paper used in Untitled, Country Interlude is a mid-tone, (such as tan) consistent with Watteau’s choice of materials.

The lower classes, both in town and country, notwithstanding the daily changes of fashion which they saw going on around them, had not changed, in regard to dress, for the last century or two. They were poorly clad, in winter as in summer, but poorly provided with linen, and often going about with naked feet, but never without a covering to the head. The females of the lower classes were always neatly dressed, sometimes with remarkably good taste: “The girls dress is plain and yet comely, and amongst them may be studied that sort of coquetry which Rousseau declares to be inherent in the female nature. These women wear only inexpensive dresses, with a little gauze and a few bits of ribbon, but they make the most of them, and produce considerable effect out of very little. Their coiffure is very simple, but it suits them so well that it seems perfect." This corresponded very closely with Rousseau's opinions, for, in "Emile," he writes: "Give a young girl who has good taste and sets little store on the fashion of the hour, some ribbon, gauze, muslin, and flowers, and she will make, without the aid of diamonds, lace and trinkets, a head-dress which will suit her a hundred times better than all the jewellery of Duchapt could do."

Note: See thumbnail image of the artists name on verso of frame