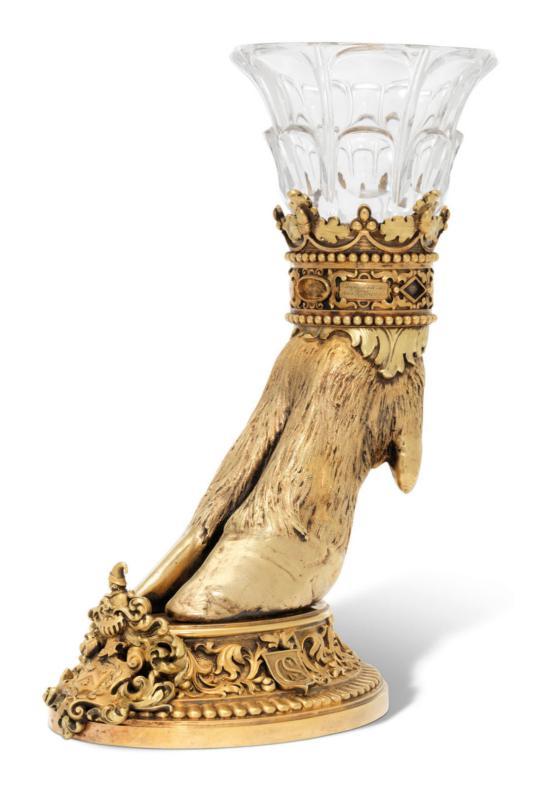 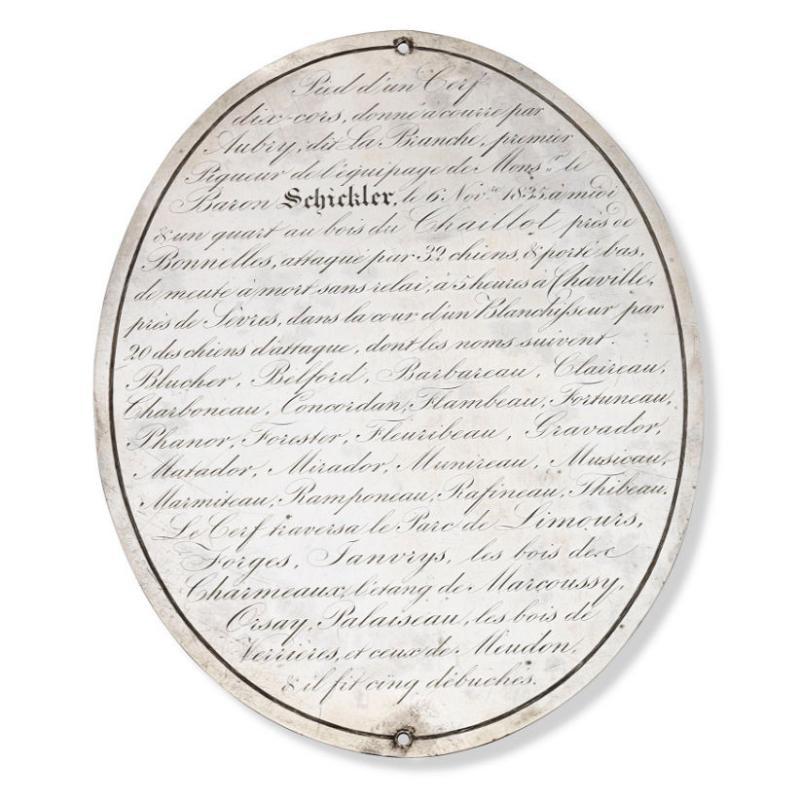 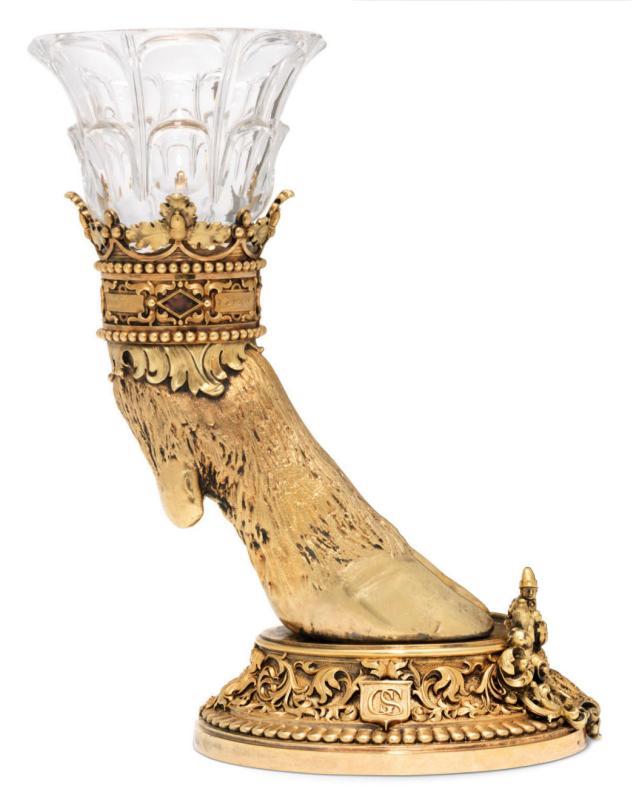 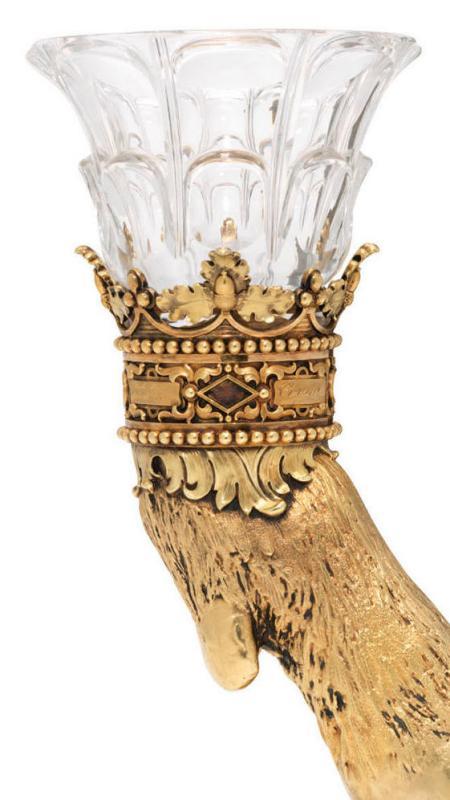 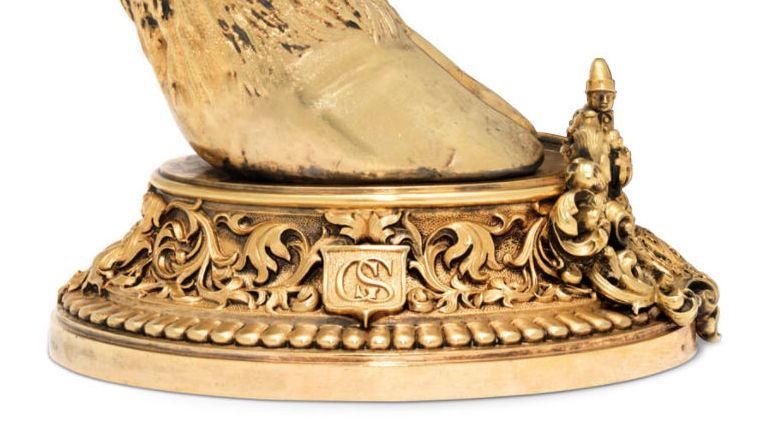 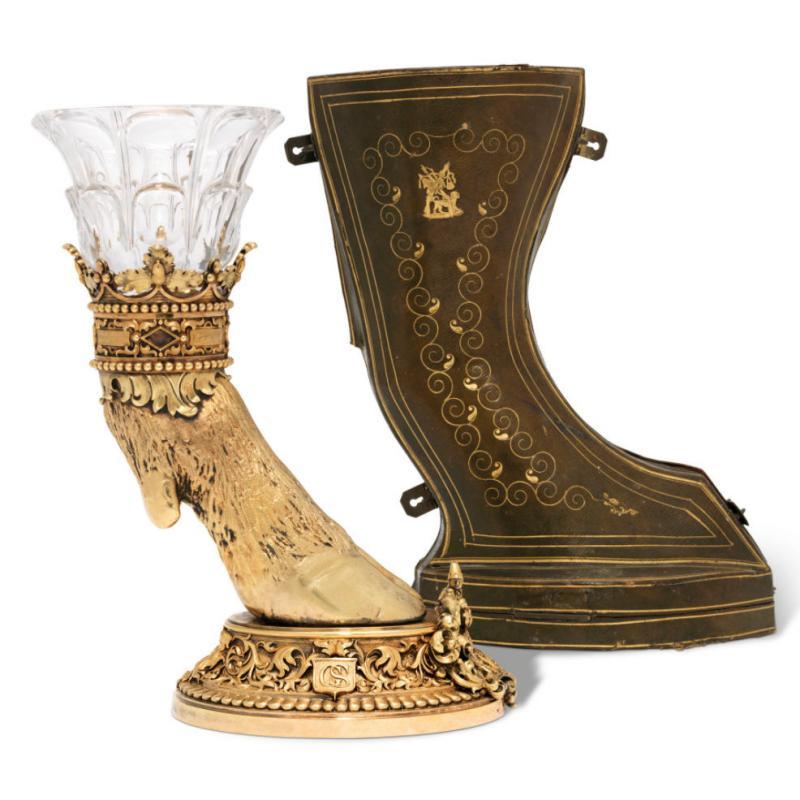 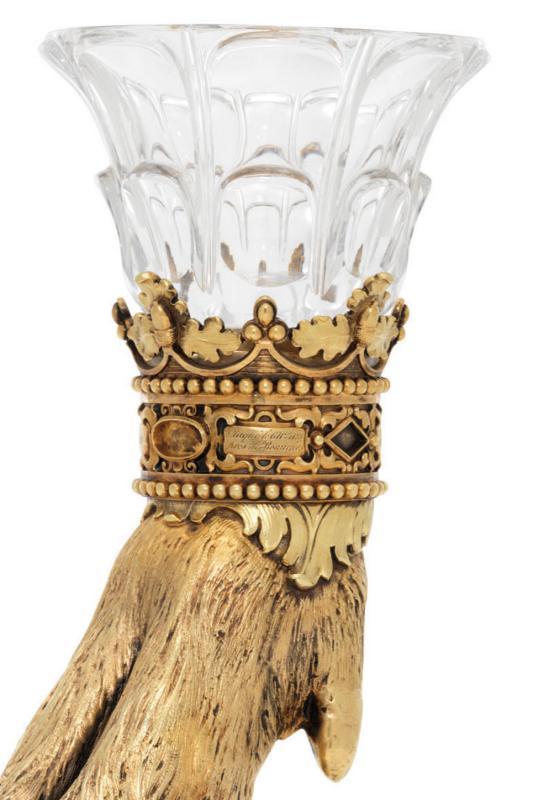 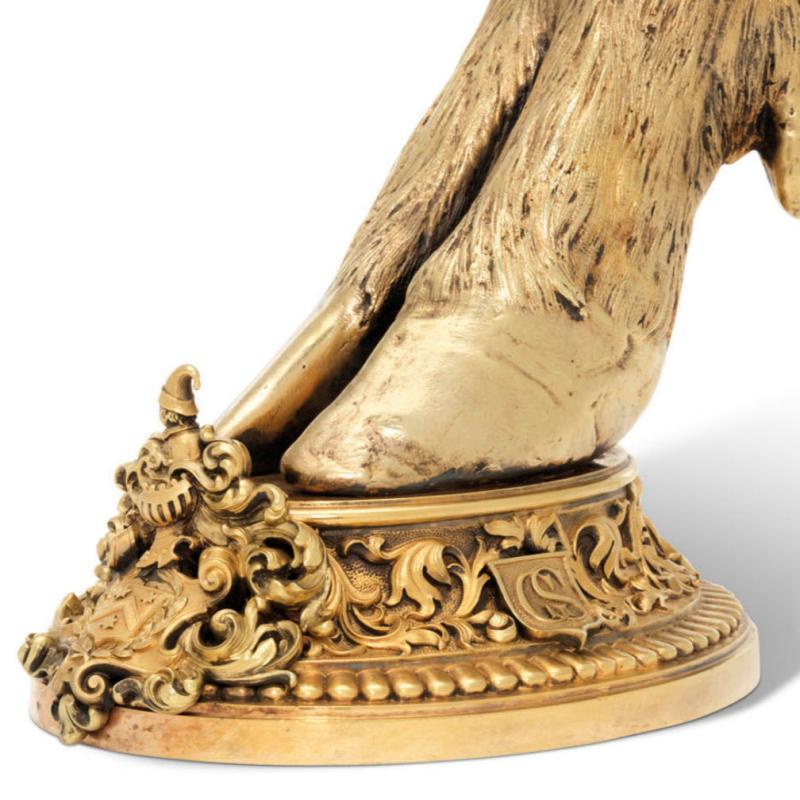 Our client's amazing silver-gilt and gilt-metal hunting cup, 11 in (28 cm) tall, with its original presentation case, was designed by Jean-Francois Deniere  (1774–1866) of Paris, circa 1835, and celebrates the downing of a ten-point stag near Paris by Baron Johan-George Schickler (1793-1815)

It has an oval gadrooned base cast with gothic style foliage and applied in the front with a rococo cartouche and coat-of-arms and two shields with initials GS for Baron Johan-Georg Schickler (1793-1843).   The stem is formed as a stag's hoof topped by an oak leaf crown above a band of gothic scrolls framing cartouches engraved with inscription, the base fitted with a silver plaque engraved with inscription, with detachable cut-glass cup and original fitted leather case, engraved on base DENIERE A PARIS.  Total height is 11 in, 28 cm.  In good condition.  Mounting screws missing from the engraved silver plate. Some bends to the plate.  Light rubbing wear and scratches overall.  Wear to the leather case and some small losses and separations.

This passage translates to:  "Deer hoof, ten horns, caught by Aubry dit La Branche, first Piqueur of the Mons crew.  Baron SCHICKLER, November 6, 1835 at a quarter past twelve in the Bois du Chaillot, near Bonnelles, attacked by 32 dogs and door low, from pack to death without relay at 5 a.m. at Chavilles, near Sèvres, in the yard of a launderer by 20 of the attack dogs, whose names follow. Blucker, Belford, Barbareau, Claireau, Charboneau, Concordan, Flambeau, Fortuneau, Phanor, Forester, Fleuribeau, Gravador, Matador, Mirador, Munireau, Musicau, Marmiteau, Ramponeau, Rafineau, Thibeau. The stag crossed the Parc de Limours, Forges, Janvrys, the woods of Charmeaux, the pond of Marcoussy, Orsay, Palaiseau, the woods of Verrières and those of Meudon and he made five outlets."

According to Christie's, Johan Georg Schickler (1793-1843) was born in Bordeaux in a wealthy Prussian banking family who emigrated to Switzerland in the 16th century, first in Basel before moving to Mulhouse, Berlin and finally Paris. The family moved in the highest Parisian social circles acquiring the famous hôtel Crozat on the Place Vendôme in 1828 which they filled with works of arts and painting especially equestrian by Carle and Horace Vernet, Géricault, and Eugène Delacroix as the family had a passion for horse racing and hunting. Denière was a bronze maker retailing furnishings, chandeliers, clocks, candelabra, torchères and ornamental mantel clocks, established in 1804 by Jean-Francois Deninger (1774-1866) (called Denière) and François Thomas Matelin (1759–1815).

According to Sotheby's, Jean-François Dénière established his business as a fabricant de bronzes in 1803. He was at 58 rue de Turenne in 1813 and by 1820 at 9 rue d'Orléans au Marais. He went into partnership with his son Guillaume in 1844.  According to the notes on makers in the French version of the catalogue for the 1862 International Exhibition in London, they were one of the first serious competitors to Thomire.  The company's work was illustrated by J.B. Waring in his treatises on both the 1851 and the 1862 exhibitions, and George Wallis of the South Kensington Museum wrote in his analysis of the bronzes and works of art for the Art Journal Supplement 1851 that decorative adjuncts in bronze ormolu formed a very striking feature of Deniere's display.  The firm exhibited widely to the end of the century and finally closed in 1903 some sixty years after Thomire.  Denière supplied the French and European courts such as Versailles, the Grand Trianon, Buckingham Palace, the Hermitage  and the White House.  Princes and kings figured among Denierè’s wealthy clients and Denière supplied important commissions to the Mobilier de la Couronne (mainly clocks for the Tuilleries), to Kisselef, the Russian Ambassador, and to Said Pasha, the viceroy of Egypt.  Records shown that the firm was active until 1903.