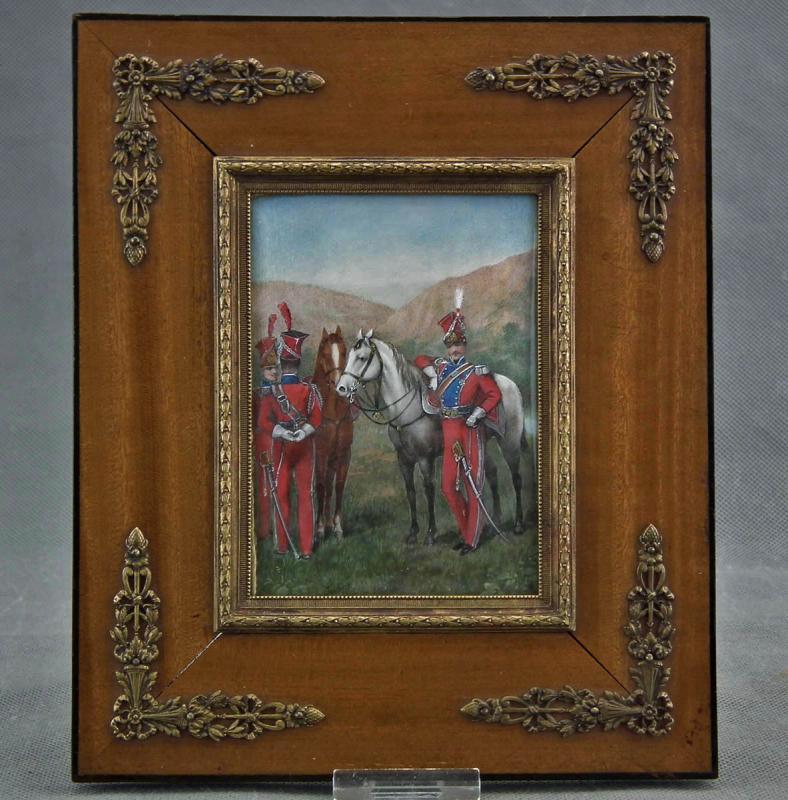 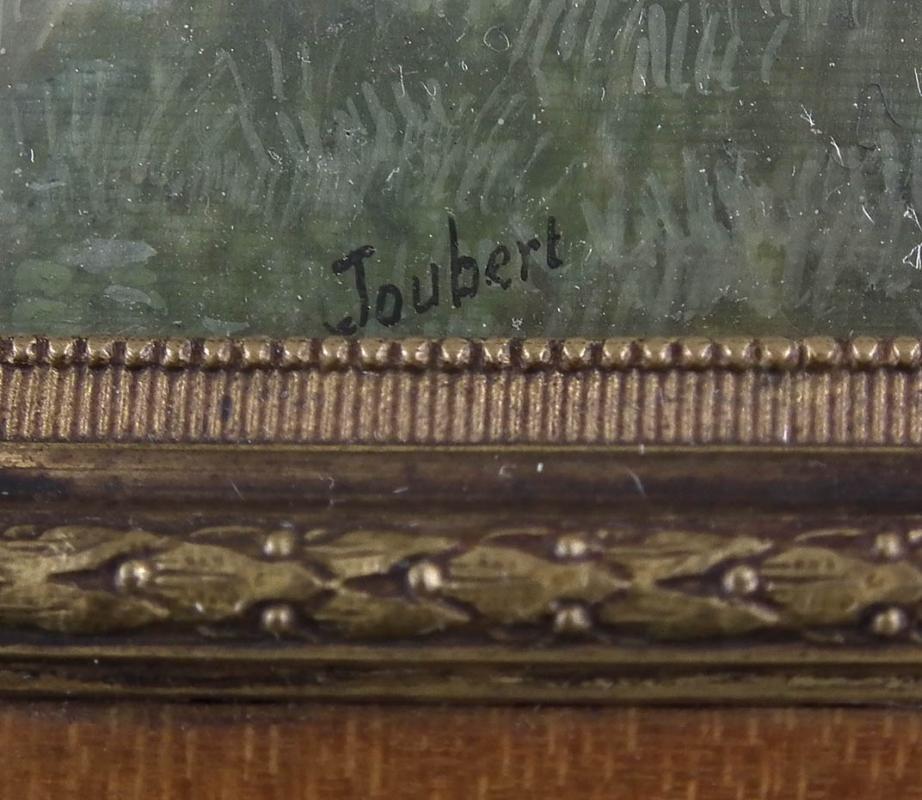 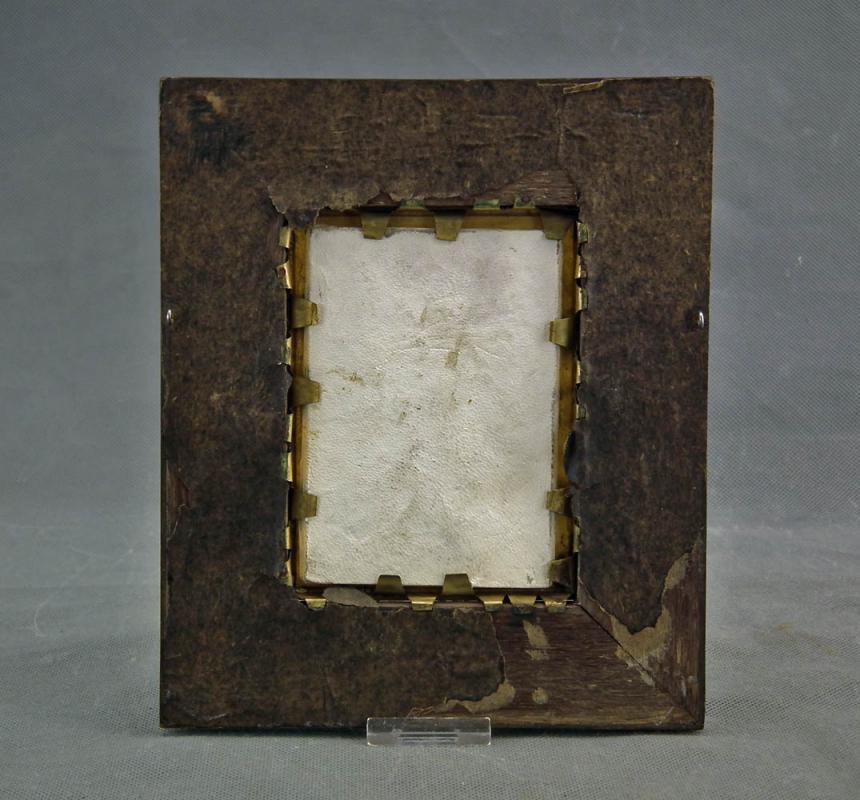 Antique miniature painting from the second half of the 19th-century depicting Napoleonic Dutch officers - Red Lancers of the Imperial Guard (Lanciers rouges de la Garde impériale) standing by their horses and dressed in their famous red uniforms at the bivouac.
The miniature is hand-painted by the French artist Joubert in watercolors and gouache on an organic wafer, signed by the artist "Joubert" in the lower left.

This finely painted with a fine brush miniature shows the artist's superb skills with extremely realistically painted horses and officers in accurate proportions, showing fine details of their uniforms and sabers.
Set under a convex glass mounted in an opulent gilt bronze ormolu inner frame, housed in a wooden frame with ebony claddings, adorned on the corners with ornate gilded bronze ormolu Empire plaques.
Backed by the supporting board and affixed with two loops for suspension.

MEASUREMENTS:
Dimensions of the wooden frame: 21 cm (8.3 inches) x 17 cm (6.7 inches).
Dimensions of the inner bronze frame: 13 cm (5.1 inches) x 9.8 cm (3.9 inches).
CONDITION: This original painting is in very good condition, with no restorations or repairs. Frame with old patina showing its age and use.

HISTORY of the REGIMENT: The official name of the regiment in French: 2e régiment de chevau-légers lanciers de la Garde Impériale (English: 2nd Regiment of Light Cavalry Lancers of the Imperial Guard).
"Regiment de Hussards de la Garde a Cheval du Roi” became the 2nd. Regiment of Lancers of the Guard of Napoleon
One of the most famous regiments of the Imperial Guard was the 2nd (Dutch) Lancer Regiment, the famous Red Lancers, so named because of the color of their uniforms. Originally a Dutch light cavalry regiment, it entered the French Imperial Guard on September 13, 1810, after the Kingdom of Holland was annexed by Napoleon.
The 2e Chevauleger- lanciers de la Garde (hollandaise) rose from the status of Middle Guard in 1811, having its first five squadrons designated as Old Guard in 1813. The promotion to the status of Old Guard put the Dutch lancers on the pinnacle of the pecking order of the French army. In 1812 totaled 1,500 men and was sent to Russia.

The regiment served at Smolensk and in the Battle of Moscow (Borodino). During the retreat, the Poles once again distinguished themselves when in the early hours of October 25, near the small village of Horodina, the Emperor and his headquarters staff were attacked by Cossacks. During the retreat, the 1st Polish Guard Lancers wisely had their horses roughshod and saved two hundred horses out of a thousand. The Dutch 2nd Regiment was only able to save a few officers' mounts. They suffered crippling losses in Russia in 1812, and the essential Dutch character was lost, most of the replacements being French, some coming from the mounted component of the Garde de Paris and members of Joseph's former Guard.
With the abdication of the Emperor in the Spring of 1814, a single squadron of 150 men accompanied the Emperor to Elba, with only 22 men being mounted.
When Napoleon returned to France for the 100 Days campaign, the lancers marched with him, carrying their saddles on their backs. The regiment could not be reformed, as what existed of it in 1814 had been disbanded. The Lancers fought bravely during Ney's great cavalry attacks on the British center at Waterloo.