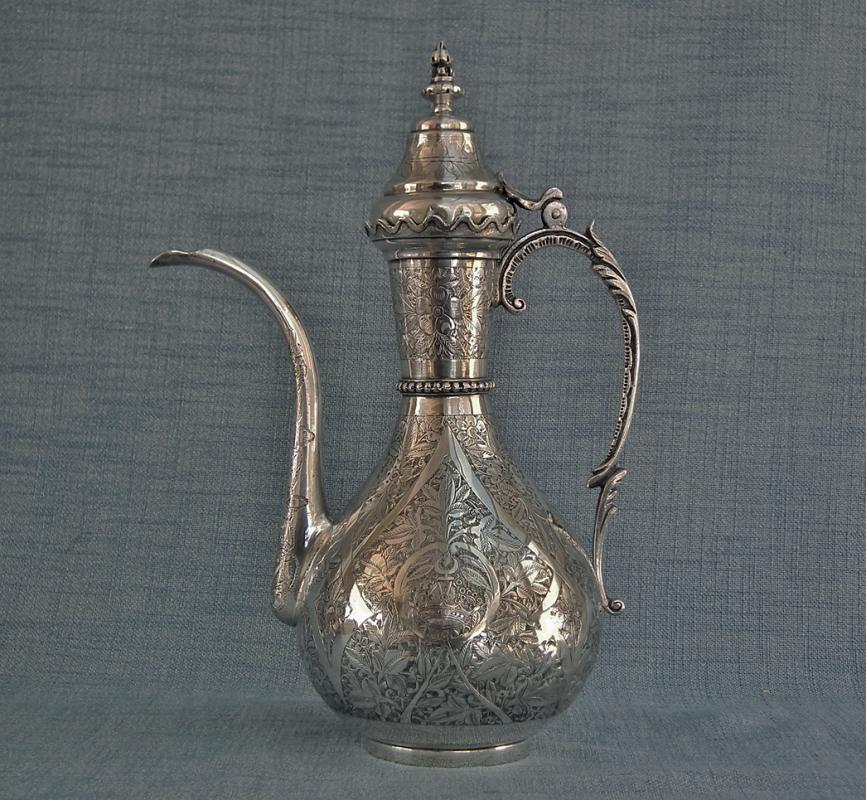 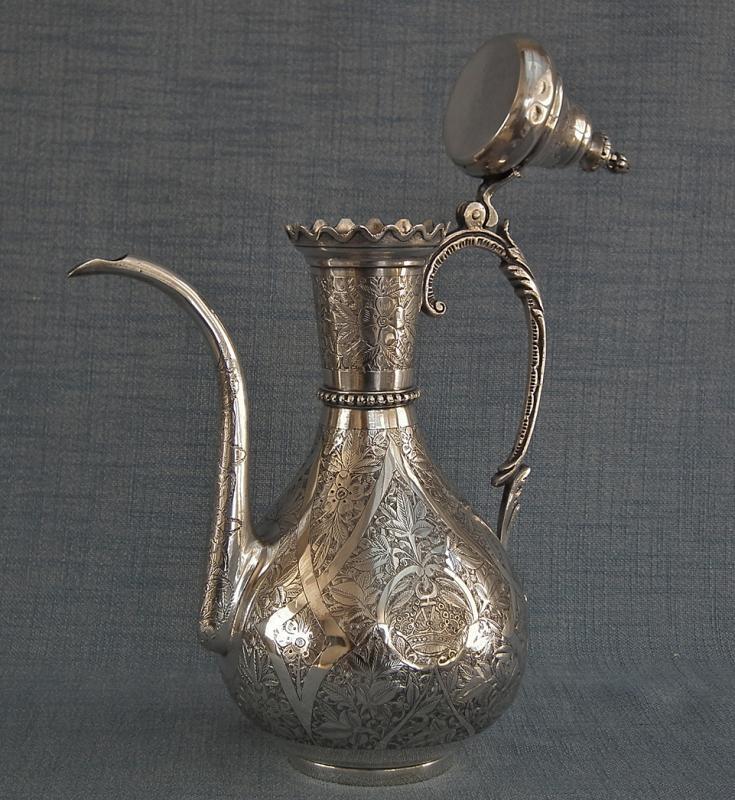 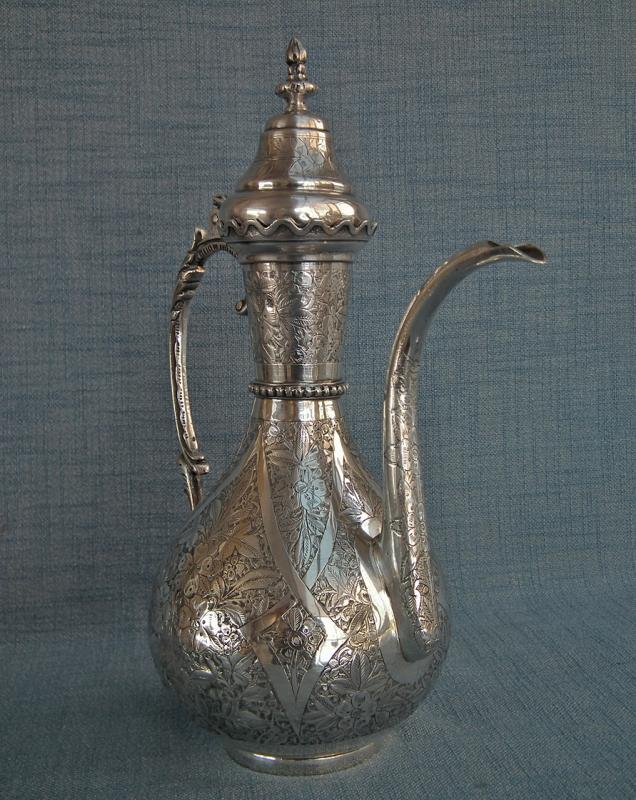 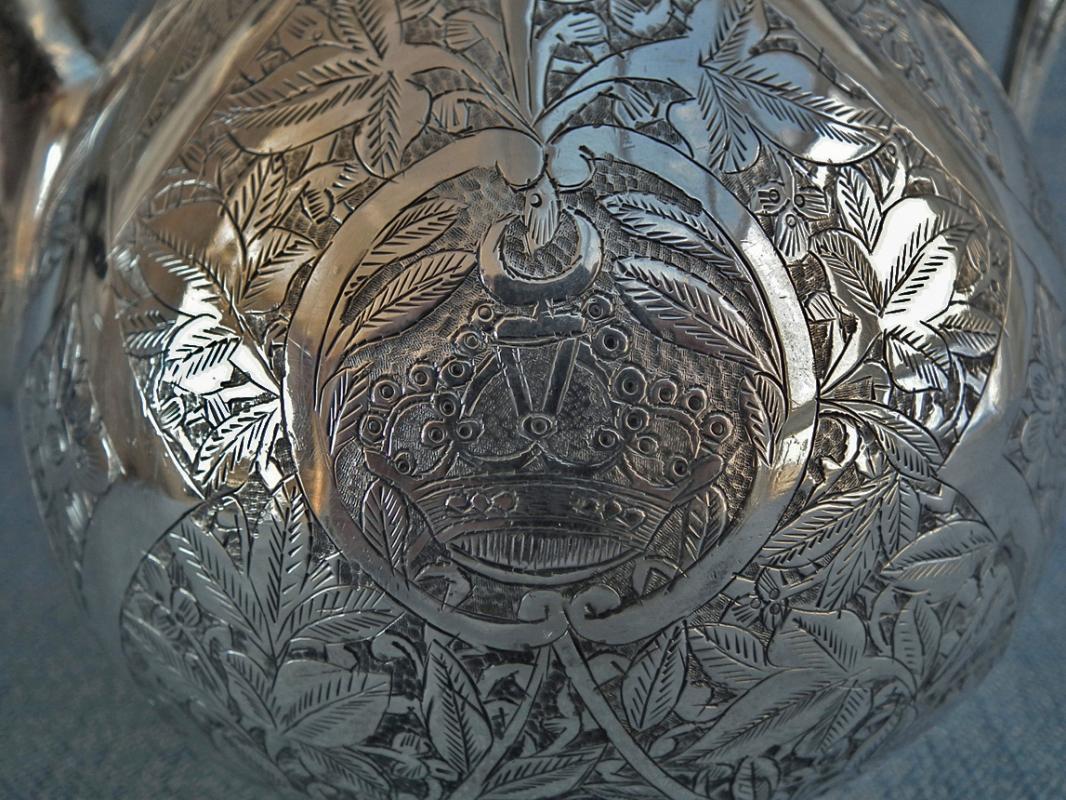 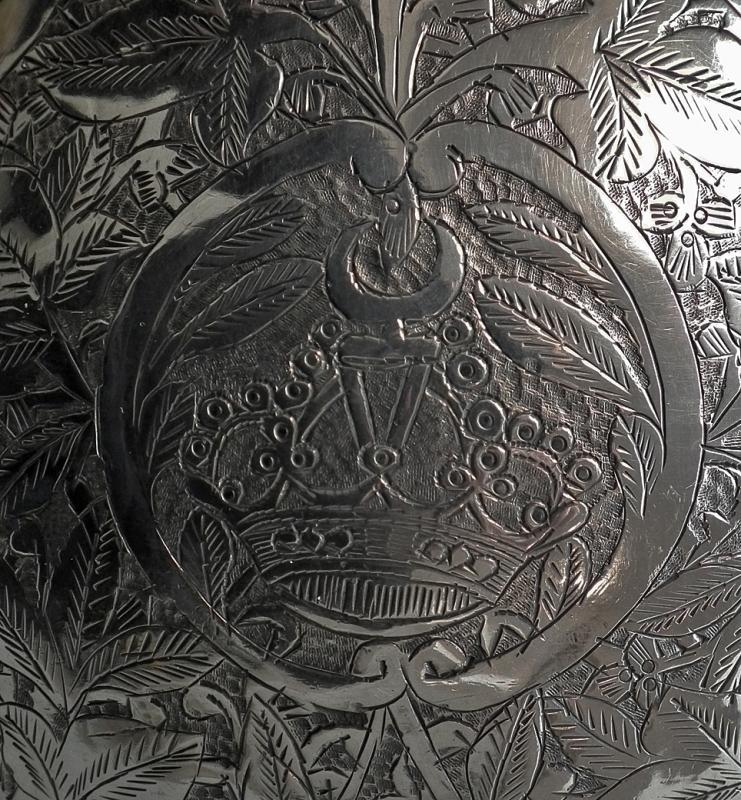 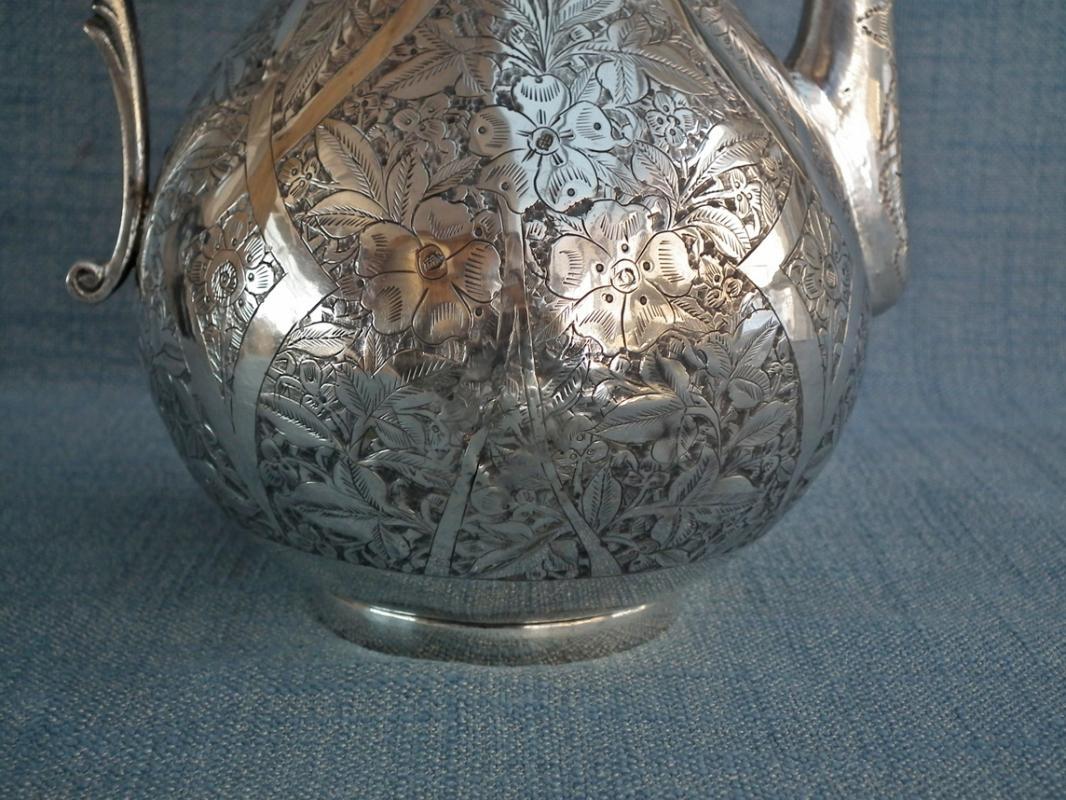 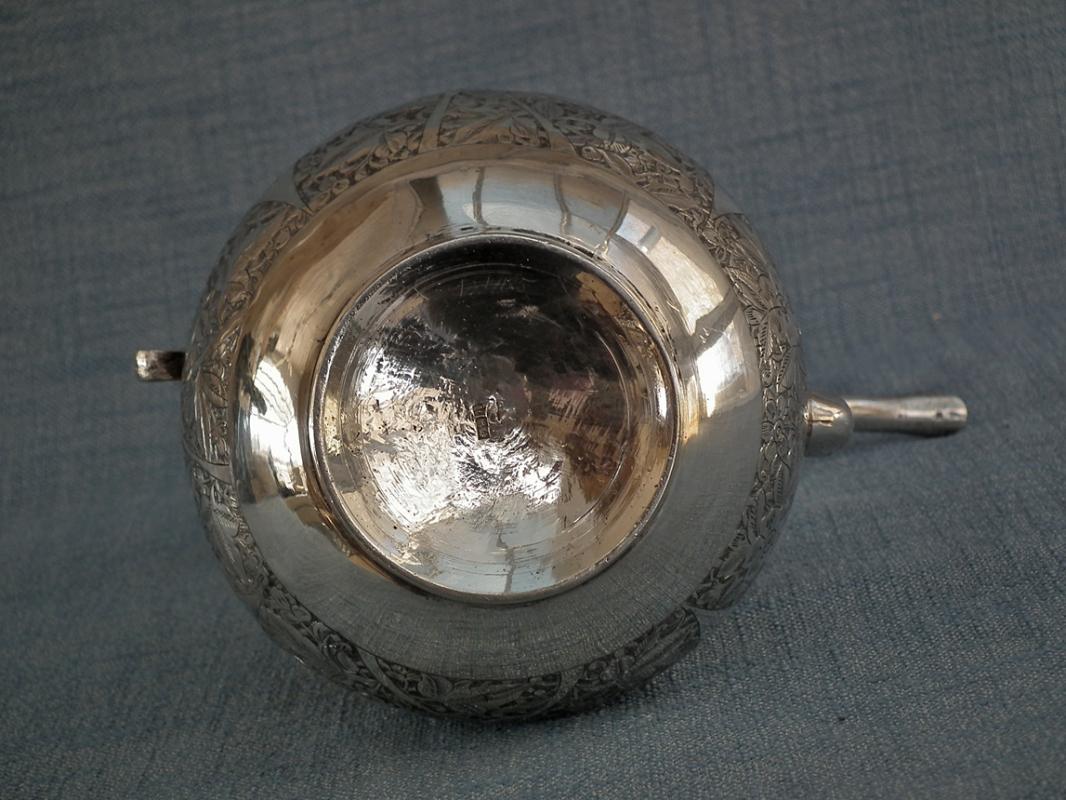 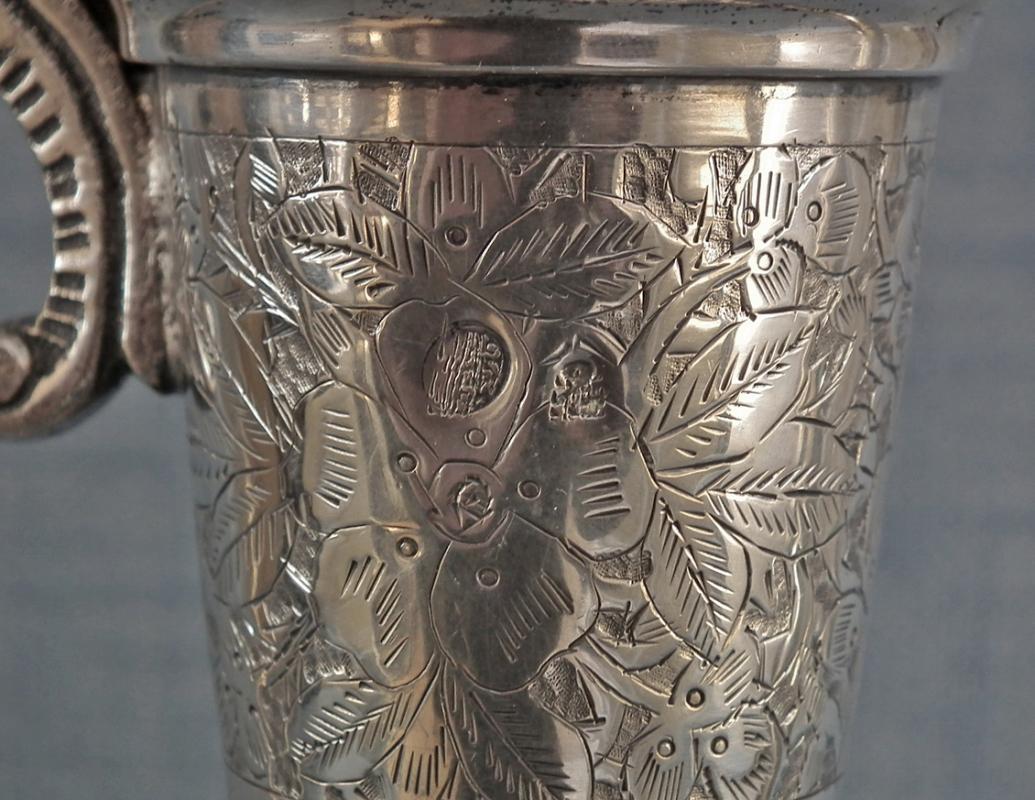 An important antique Islamic Royal Egyptian solid silver ewer in  Ottoman form of His Majesty King Fuad I of Egypt. Engraved on the center with the Royal Crown of Egypt within circular cartouche.

There are several known personal objects belonging to the Egyptian kings of King Fuad I and King Fuad II bearing the crown of Egypt, that appeared for sale on the international art market.

List of the some of these objects belonging to His Majesty the King of Egypt Fuad I. Case bearing the Royal Crown of Egypt

2. King Fuad I of Egypt (1868 - 1936), a deluxe golden traveler’s cutlery from the Royal yacht 18-carat yellow and rose gold and steel. G. Keller, Paris. Bearings the Royal Crown of Egypt

3.A very fine and rare silver and enamel Art Deco 8-day miniature ''hump-back'' desk timepiece with original box, made for King Fuad I of Egypt. Bearing the Royal Crown of Egypt

5. A SILVER AND YELLOW GOLD OPEN-FACED KEYLESS WATCH NO 1906. Bearing the Royal Crown of Egypt

6.Breguet pocket watch was made especially for King Farouk and presented to him c. 1935

List of the some of these objects belonging to His Majesty the King of Egypt Fuad II. Case bearing the Royal Crown of Egypt

1.King Farouk of Egypt's Patek Philippe Watch (Royal Crown of Egypt engraved on the back of the case).

2. A parcel-gilt silver box bearing the crest of King Farouk of Egypt (r.1936-52), Keller, Paris, France for the Egyptian market, first half 20th century. bearing the Royal Crown of Egypt

DETAILS: A solid silver ewer of typical Ottoman form with domed hinged lid and urn finial, the elongated neck with wavy line rim above a squat pear form body, the spout of elegant curving swan neck form, with leaf and scroll handle. Engraved at the center with the Egyptian Royal Crown within circular cartouche amongst finely engraved palmette and floral motifs.

The neck of the ewer is also stamped with two other silver hallmarks possibly Ottoman Tughra and the other smaller mark, however those hallmarks are deeply scored by some sharp tool, as though someone did this deliberately to remove the old regime Ottoman silver hallmarks, so they are not clear and very poorly visible.

Condition: The Ewer is in good condition considering it age, except for an old repair on the center of the lower part of the globular body.

He was the Sultan and later King of Egypt and Sudan, Sovereign of Nubia, Kordofan, and Darfur. The ninth ruler of Egypt and Sudan from the Muhammad Ali dynasty, he became Sultan of Egypt and Sudan in 1917, succeeding his elder brother Sultan Hussein Kamel. He substituted the title of King for Sultan when the United Kingdom recognized Egyptian independence in 1922. His name is sometimes spelled Fouad.