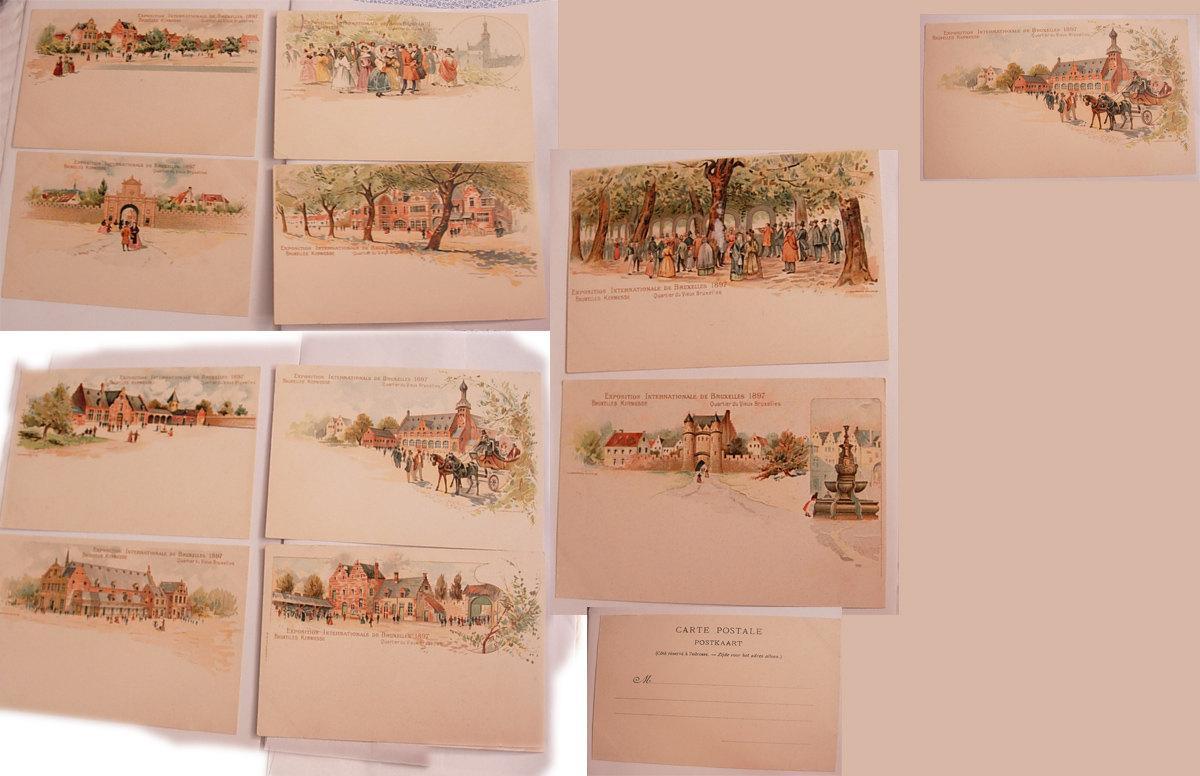 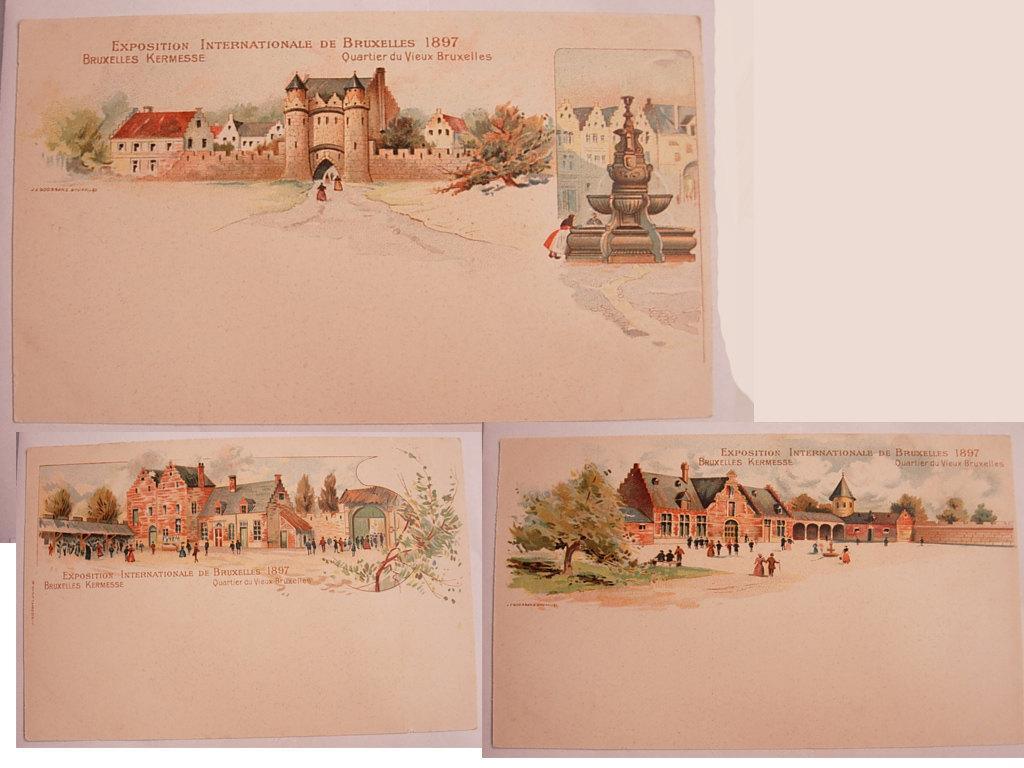 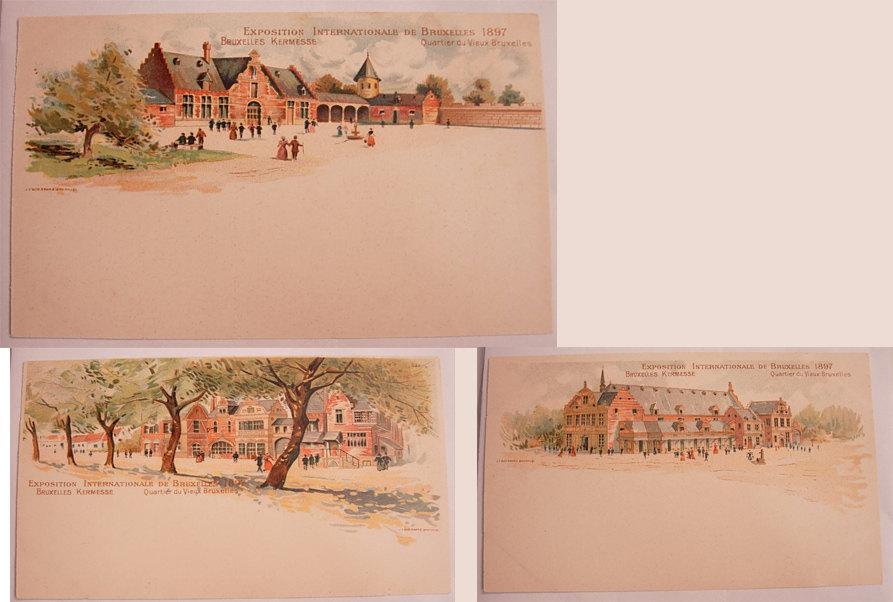 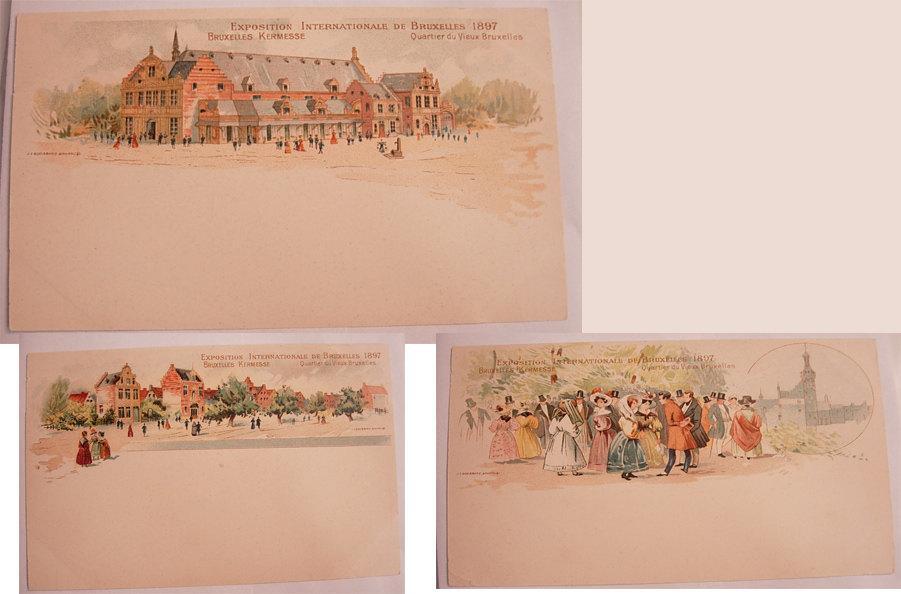 These are Ten Vintage Victorian Antique Exposition Internationale de Bruxelles 1897 Postcards. All ten of the postcards are beautiful and different vintage artists concepts of the Exposition. On each uncirculated postcard it says; Exposition Internationale De Bruxelles 1897, Bruxelles Kermesse, Quartier du Vieux Bruxelles. The cards show different venues about the Fair. The renderings are showcase or mounting quality. See some history below: The Brussels International Exposition (Exposition Internationale de Bruxelles) of 1897 was a World's Fair held in Brussels, Belgium, from May 10, 1897 through November 8, 1897. There were 27 participating countries, and an estimated attendance of 7.8 million people. The main venues of the fair were the Cinquantenaire Parks and a colonial section at Tervuren showcasing King Leopold II of Belgium's personal property, the Congo Free State. The two exposition sites were linked by a purpose-built tramway. The Tervuren section was hosted in the Palace of the Colonies (although there was only one colony), designed by Belgian architect Albert-Philippe Aldophe. In the main hall Georges Hobé designed a distinctive wooden Art Nouveau structure to evoke the forest, using Bilinga wood, an African tree. The interior exhibition displayed ethnographic objects, stuffed animals and in the "Hall of the Great Cultures" Congo's most important export products were displayed: coffee, cacao and tobacco. In the park, an example Congolese village was built, where 60 Africans lived through the period of the fair. The success of this exhibition led to the permanent establishment of the Royal Museum for Central Africa in 1898. The primary designers of the fair were among of the Belgian masters of Art Nouveau architecture at the height of the style: Henry van de Velde, Paul Hankar, Gédéon Bordiau, and Gustave Serrurier-Bovy. Henri Privat-Livemont produced posters for the exposition. These ten postcards are in very good vintage condition. Measure 3 1/2" by 5 1/2". Sold as found.We are not postcard experts.