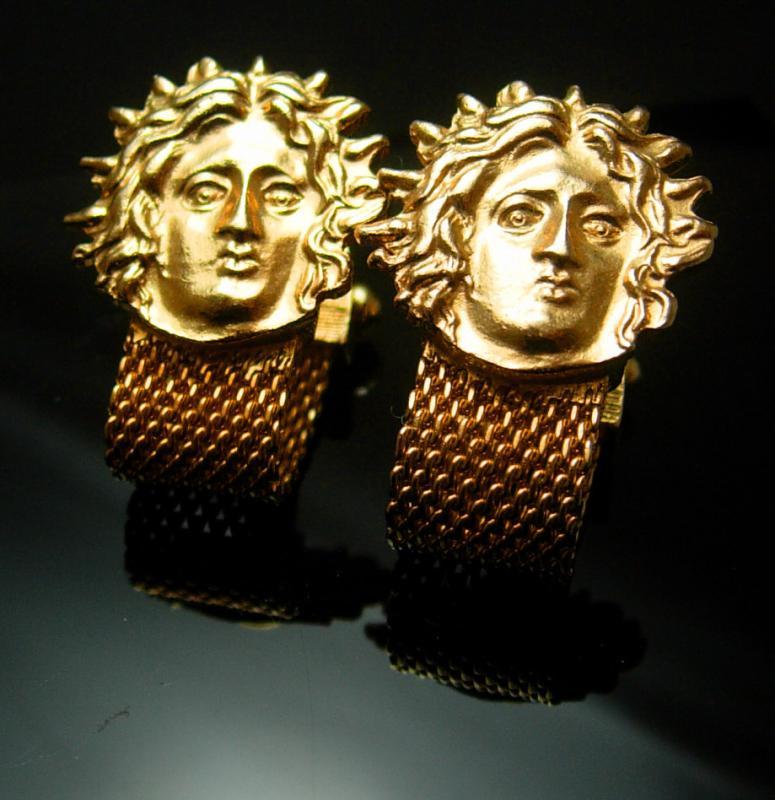 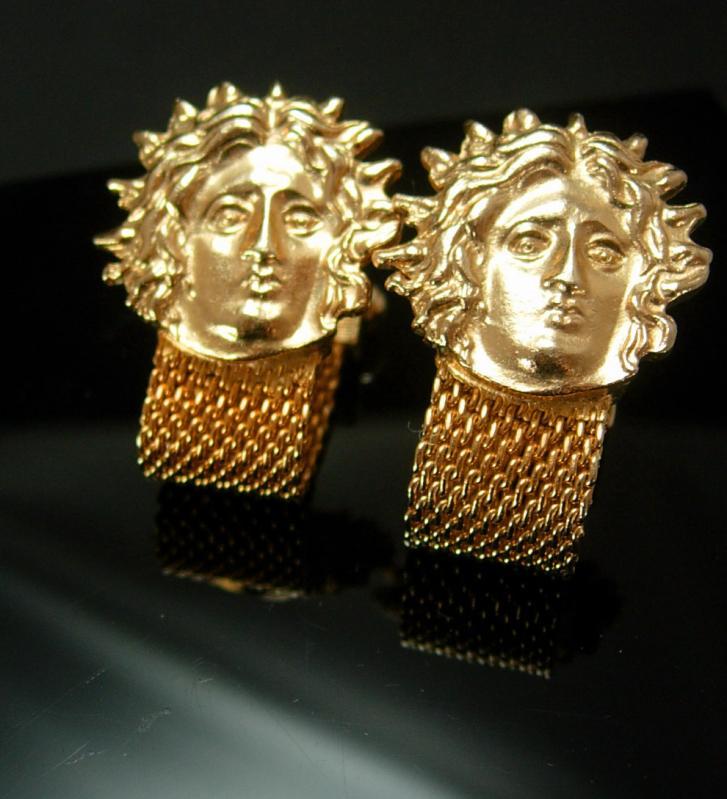 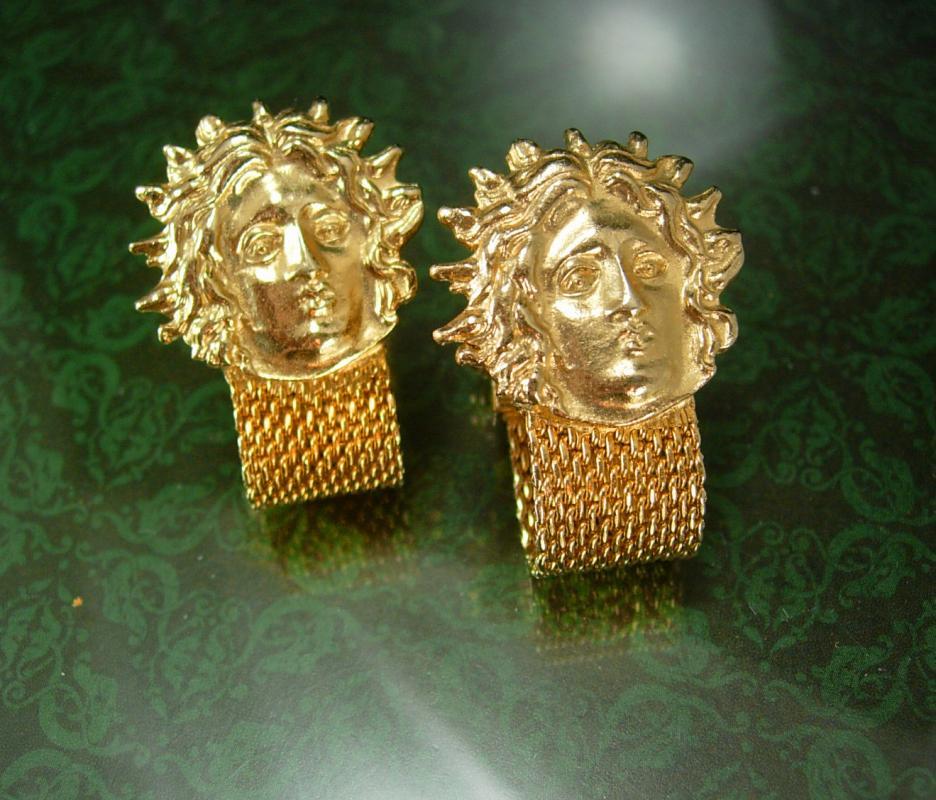 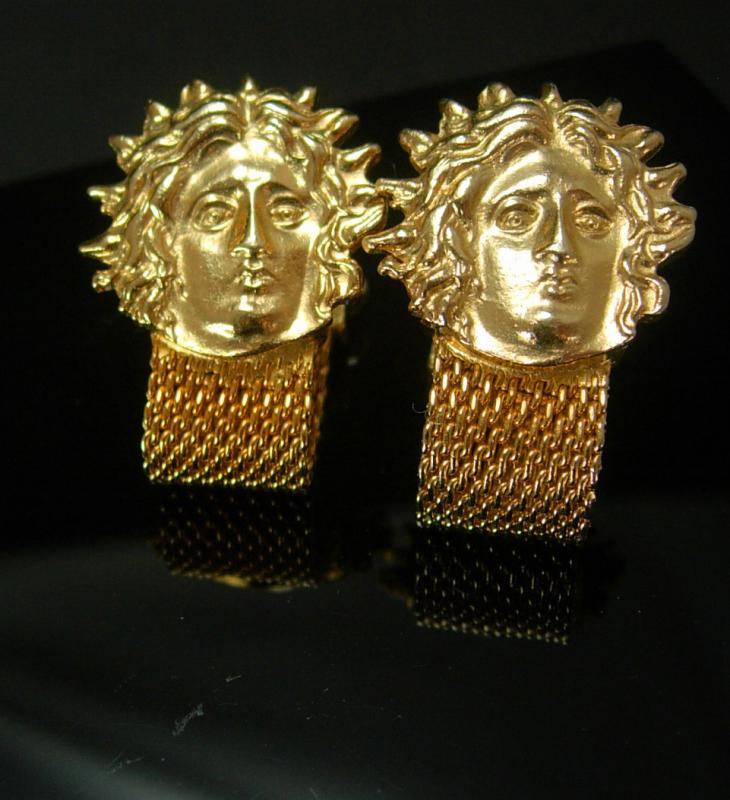 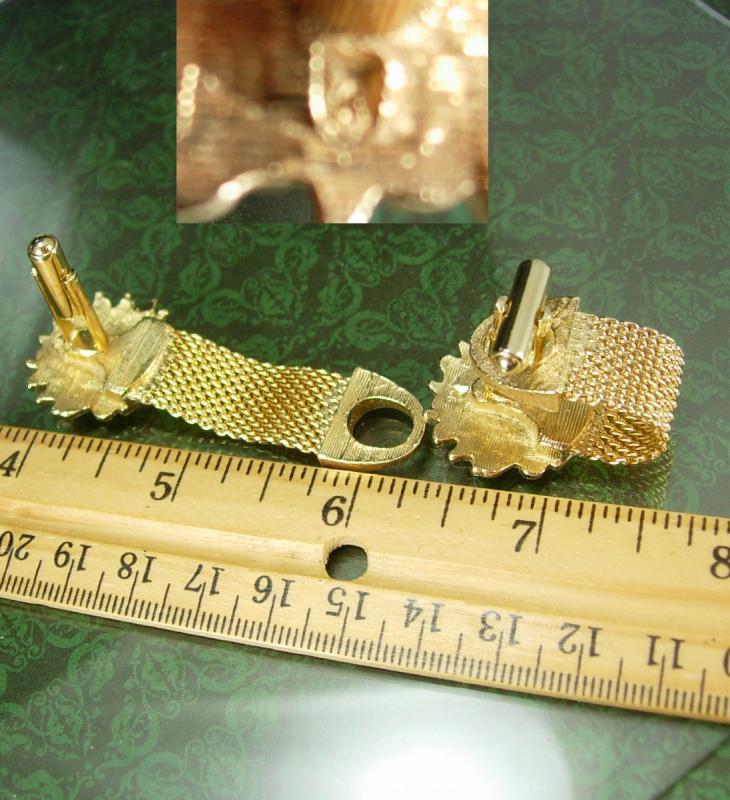 These exquisite large Medusa cufflinks are very exotic! Crafted by Swank, Circa 1950s. In Greek mythology Medusa was a monster, a Gorgon, generally described as having the face of a hideous human female with living venomous snakes in place of hair. Gazing directly into her eyes would turn onlookers to stone. In a late version of the Medusa myth, related by the Roman poet Ovid, Medusa was originally a ravishingly beautiful maiden, "the jealous aspiration of many suitors," but because Poseidon had taken her in Athena's temple, the enraged Athena transformed Medusa's beautiful hair to serpents and made her face so terrible to behold that the mere sight of it would turn onlookers to stone. In Ovid's telling, Perseus describes Medusa's punishment by Minerva (Athena) as just and well earned. Boxed for gift giving; gift wrapped on request. ∆ Maker: Swank founded as the Baer & Wilde Company in 1897 (see above), Swank was the largest maker of mens cufflinks in the 1940s - 1960s. Their "Arts of the World" cufflinks from the 1960s were unique and are particularly collectible. One of Swanks maker marks is an "S" within a pentagon (1960s). Swank sometimes produced cufflinks with renowned producers like Wedgwood (England), Royal Copenhagen (Denmark) and Arita Porcelain (Japan). Swank still operates today selling mens jewellery, belts and personal leather accessories which are distributed under license for names like Kenneth Cole, Tommy Hilfiger, Nautica, and Geoffrey Beene. ∆ Material: gold plated metal, chalcedony ∆ Size: see photo ∆ Weight: medium ∆ Condition: In good vintage pre-owned condition. ∆ Lovely patina! These are part of a MASSIVE estate collection of cufflinks and jewelry so be sure to check out our other items here: https://www.etsy.com/shop/NeatstuffAntiques?section_id=all We don’t polish these previously owned well loved pieces so we can keep the original patina. We try and photograph all of the pieces next to a ruler so you can see the actual size. All jewelry sold as found. NOTE TO BUYER: We Do not offer engraving services of any sorts as we are not equipped to do so I’m sure your local jeweler would be happy to do so, sorry for any inconvenience thank you. All cufflinks ( unless otherwise specified) are considered costume jewelry. We use the descriptions of any stones from the manufacturers titles when they were first produced. When we refer to the stones as moonstone or jade or garnet, for example, we are using how the original manufacturer of the pieces used them. We cannot guarantee the authenticity of a stone in a costume piece of jewelry. ***ATTENTION!*** Shipping rates for domestic and international delivery have skyrocketed! I have adjusted the shipping rates accordingly. If you wish to have another method of delivery (i.e. First Class International) PLEASE convo me before placing your order. My goal is to save both of us money on shipping. November22 2015   November22 2015  chged 7-2-20