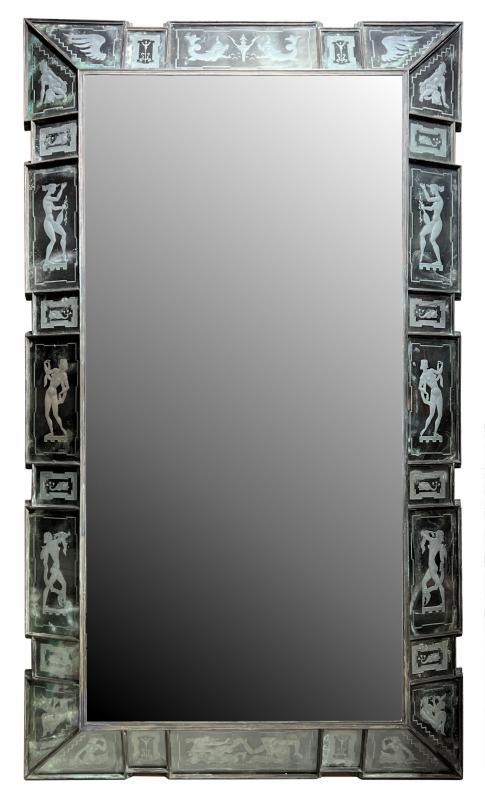 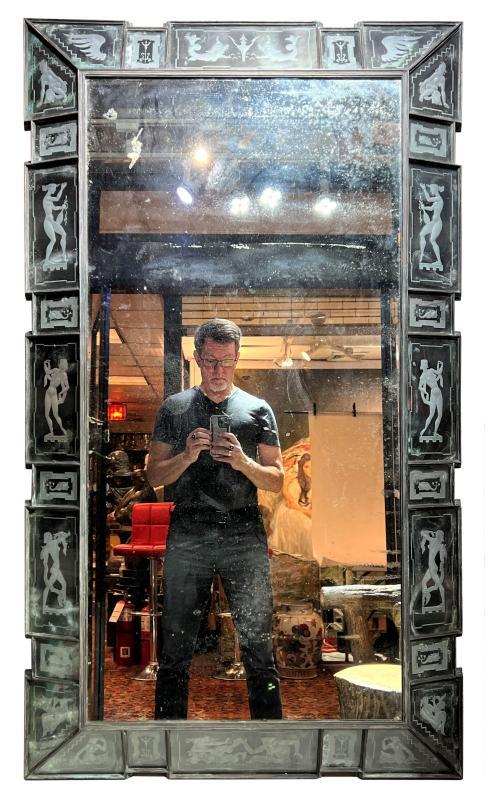 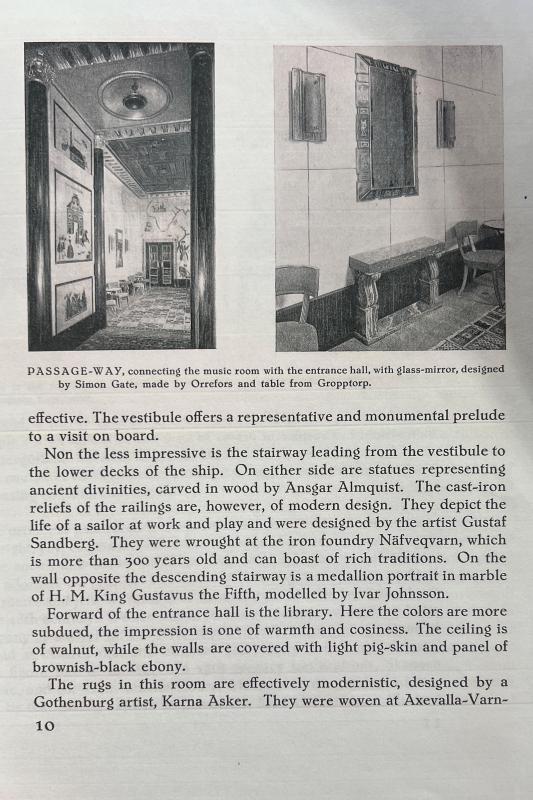 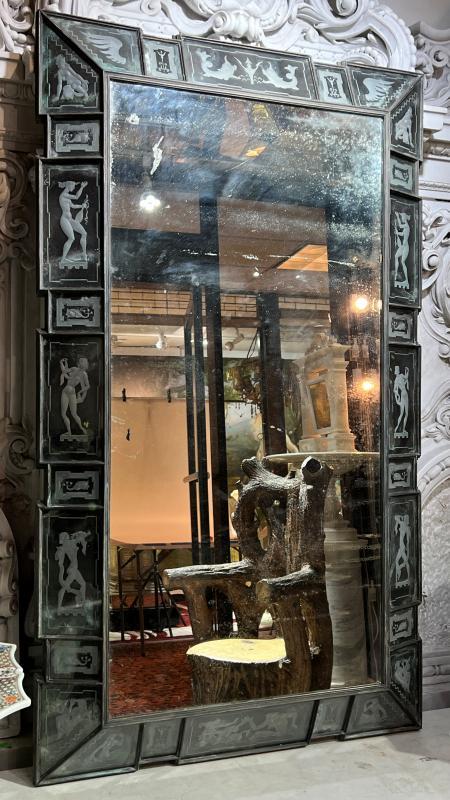 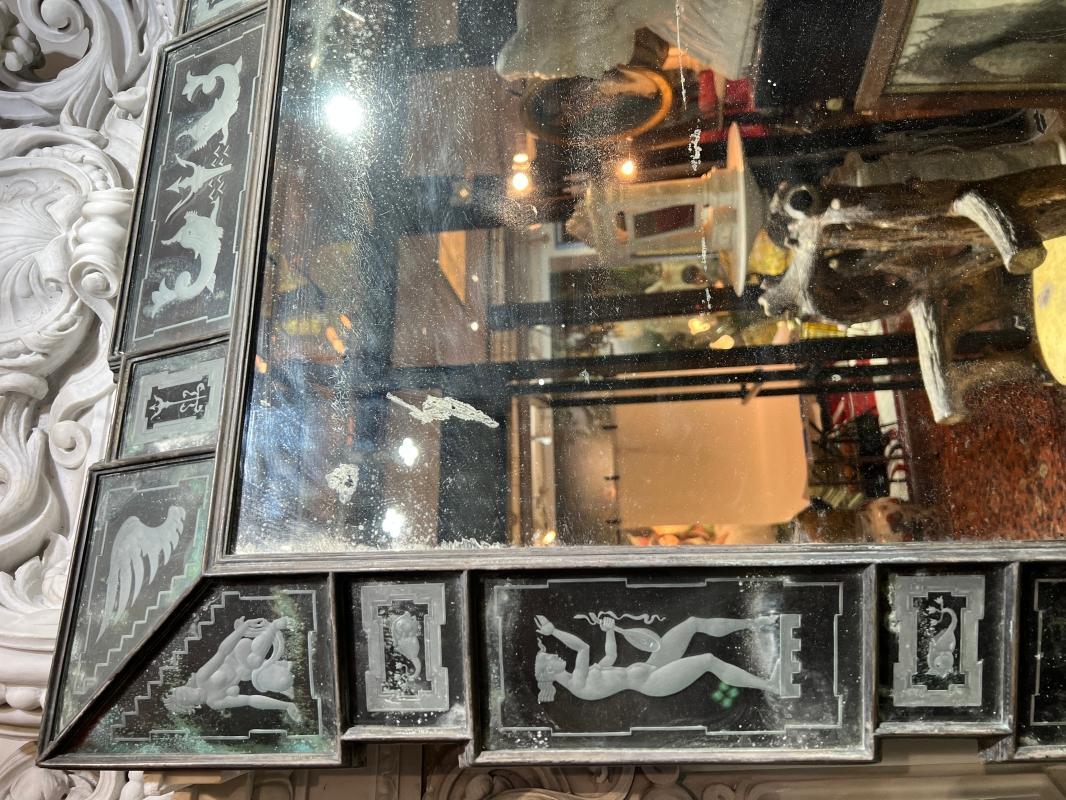 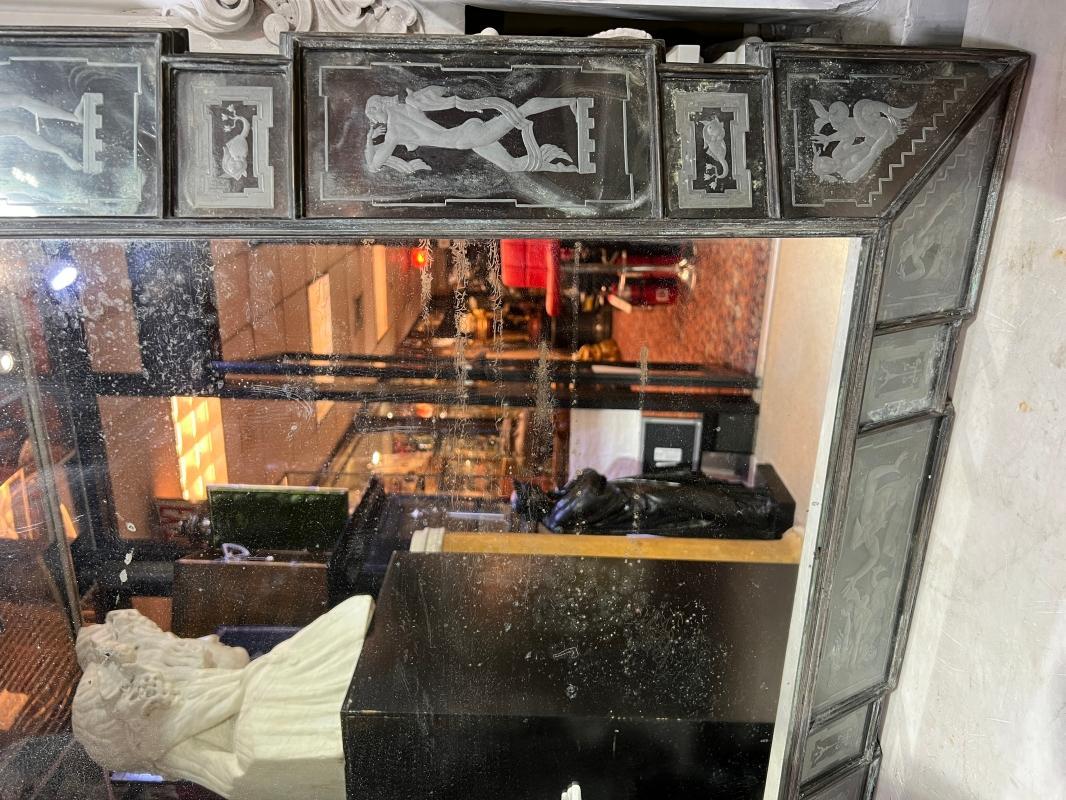 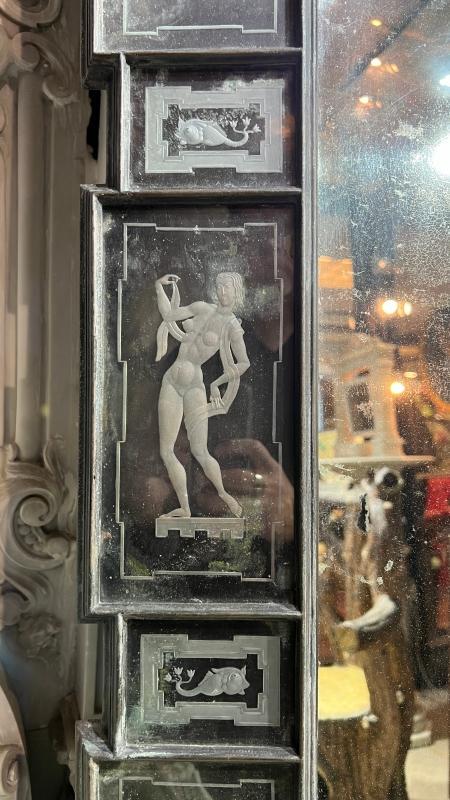 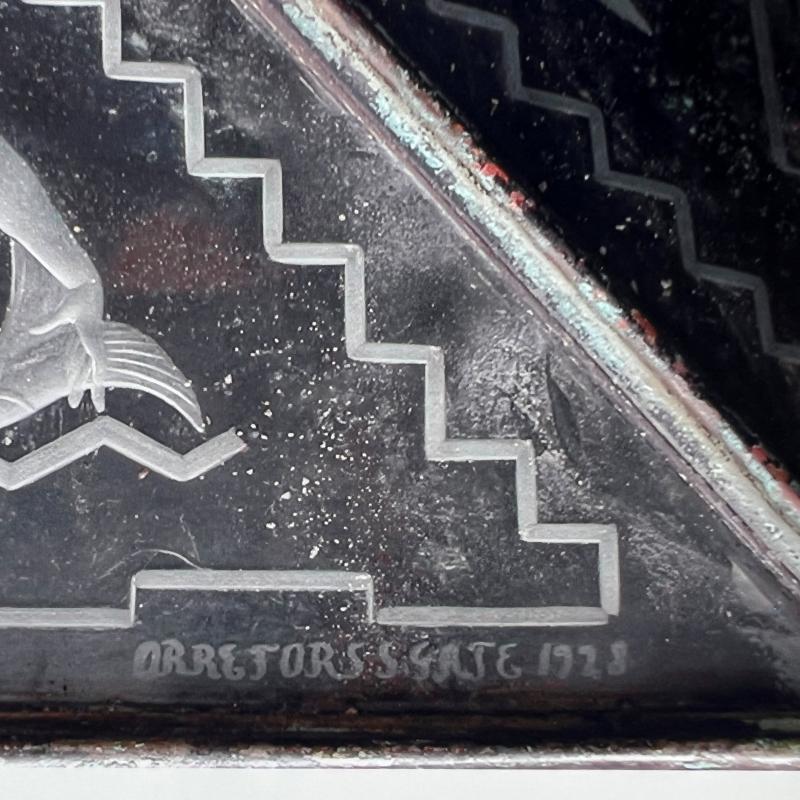 Our client's important etched glass mirror was designed by Simon Gate (1883-1945) for Orrefors in 1928, and is one of two mirrors commissioned for the Swedish oceanliner, M/S Kungsholm, which took its maiden voyage in 1929.  32 by 55.5 in (84 by 141 cm).  It has a rectangular shaped metal frame bordered by 28 shaped glass plaques with double welt caming etched with stylized mermaids, nude figures, dolphins and tridents.  Etched mark in lower right reads ORREFORS S. GATE 1928.  This is one of two mirrors that hung in the vestibule connecting the first-class main lounge, the principal and most elegant gala room on the ship, and the music room.  The whereabouts of the other mirror is not known.

Built in Hamburg in 1928, the M/S Kungsholm and had her inaugural voyage when she sailed to the Caribbean for the Swedish American Lines in 1929. The Kungsholm was not the largest of ships, but it was envisioned as an intimate showcase for Art Deco design executed in luxurious materials by Sweden's premier  artists and craftsmen.

Notably, this is one of a very few number of decorative objects from the ship that have survived following its seizure by the U.S. in 1941 for the transport of troops in WWII.  The interior of the ship was designed by Carl Bergsten to showcase the very best of Swedish fine and decorative arts to the world.  For more information, we invite you to read the lot essay from the Christie's sale in 1991 which included the mirror in lot 248.

There are numerous scratches and silvering losses to the main mirror and etched panels.

"The Kungsholm, completed in 1928, one year before the great financial world crisis began, the M/S Kungsholm was intended to be a perfect expression of the very best that Swedish decoration of that period could produce. Its renown as the great new ship of the Swedish American Line was achieved by its unique and altogether Swedish interior decoration. Professor Carl Bergsten, at that time the most famous architect in Sweden and who designed the Swedish Pavilion at the 1925 "Exposition des Arts Decoratifs" in Paris, was chosen as the artist in charge of the interior decoration of the Kungsholm.  The spacious public rooms provided a broad scope for artistic efforts and Bergsten was successful in creating a festive, comfortable, and at the same time cosy character to the interiors. In the passage way between the entrance hall and the highly decorated music room (the principal gala room in the first class lounge) were two large mirrors executed by the Orrefors Glassworks.  Their mythological engravings were designed by Simon Gate who, along with Edward Hald, was one of the two artists who were the creators of the modern Orrefors glassware.  Their classical decoration responds to the entrance's hall Empire style . In addition, all the electric fittings of the Kungsholm were manufactured at Orrefors, to the design of the architect Erik Tidstrand (A.B. Nordiska Kompaniet's electrical expert) in collaboration with Olle Elmgren and the artists at Orrefors. The dinner services were manufactured by the two leading Swedish china works: Gustavsberg and Rorstrand.  Considered as a floating museum, the Kungsholm gives an idea of the tremendous renaissance in fine design and crafts that swept over Sweden at the end of the twenties, and truly served as a showcase for Swedish decoratives arts, much as the SS Normandie did for French designers."

"The Orrefors Glassworks were founded in 1898.  Until 1913, when Consul Johan Ekman bought the factory, it only produced window panes and inexpensive tableware. Ekman started to reorganize the Glassworks by hiring artists, designers and glassworkers.  1915 was the year when Simon Gate, one of the two leading artists at Orrefors, joined the firm.  He immediately started experimenting with glass, a material with which he did not have any previous knowledge.  Gate developed a new cameo-glass technique which he named Graal, after the Holy Grail. In the early twenties, he started to design engraved glassware, together with Edward Hald (1883-1980), who joined the firm in 1917.  These mostly clear vessels were usually engraved with nude figures, mythological scenes, or Scandinavian legends."