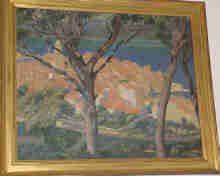 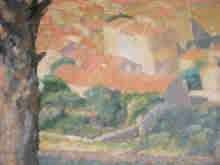 WEBB,A.C.(American,born 1889. Nashville, N.C.) SAINT-TROPEZ, oil on canvas. This painting was done by well-known American Impressionist A. C. Webb during his sojourn in France in the Twenties, and is signed and dated 1925. Saint-Tropez had just been "discovered" by the writer Colette and had not gained the worldwide popularity it has today with the "in" set. It still looks the same now -- at least from this angle! Webb was early on a student at New York's Art Student's League. Traveling to France, he became a member of Paris's illustrious Association Artistique Americaine, where he produced a large number of paintings and engravings, many of them acquired by the French government. He is well represented in museums in America and abroad. Approximately 19-1/2 inches by 24 inches. Superb condition, fine gilt frame.